Our Worst Night YET: Back to Fairhope for the Loot then Pirates Cove

We had such a great time at Dauphin Island! We were productive, we could walk to town, we swam in the ocean, it was everything we wanted from a great anchorage!  We spent a great deal of time on the internet thinking about what projects we would want to do in the next couple of months, what we needed, and what we wanted.  And we ordered a ton of stuff! So after all the things were delivered we headed back to Fairhope to pick up all the loot that had been shipped to the Lacey’s.  Thank you again so much guys! 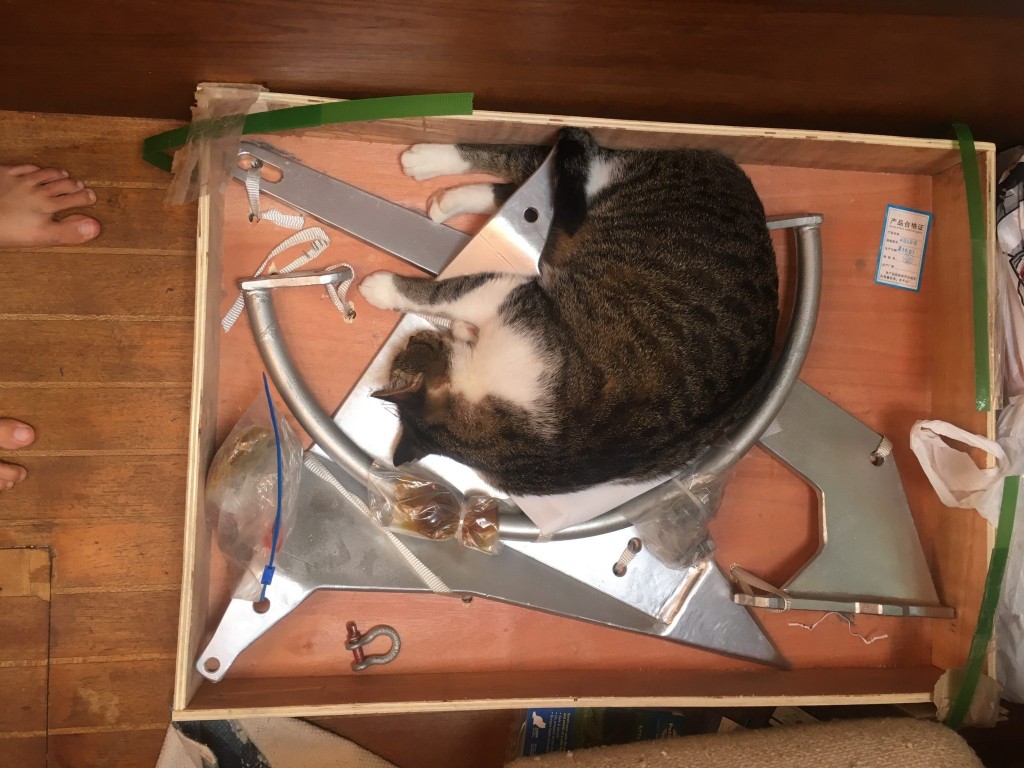 One of the biggest orders (physically and monetarily) was our new 45lb Mantus Anchor. Erik has written a great anchor review and our thought process on why we chose it, so make sure to check that out!  We also got 75ft of chain and 225ft of rope to go with it.  I was so excited to get our anchor assembled.  I had heard that it didn’t fit on the bowsprits of some boats, but it fit on ours no problem and looked great.  It was a big upgrade from our 25lb spade anchor. Instead of using a shackle Erik spliced the anchor rope to the chain for extra strength. 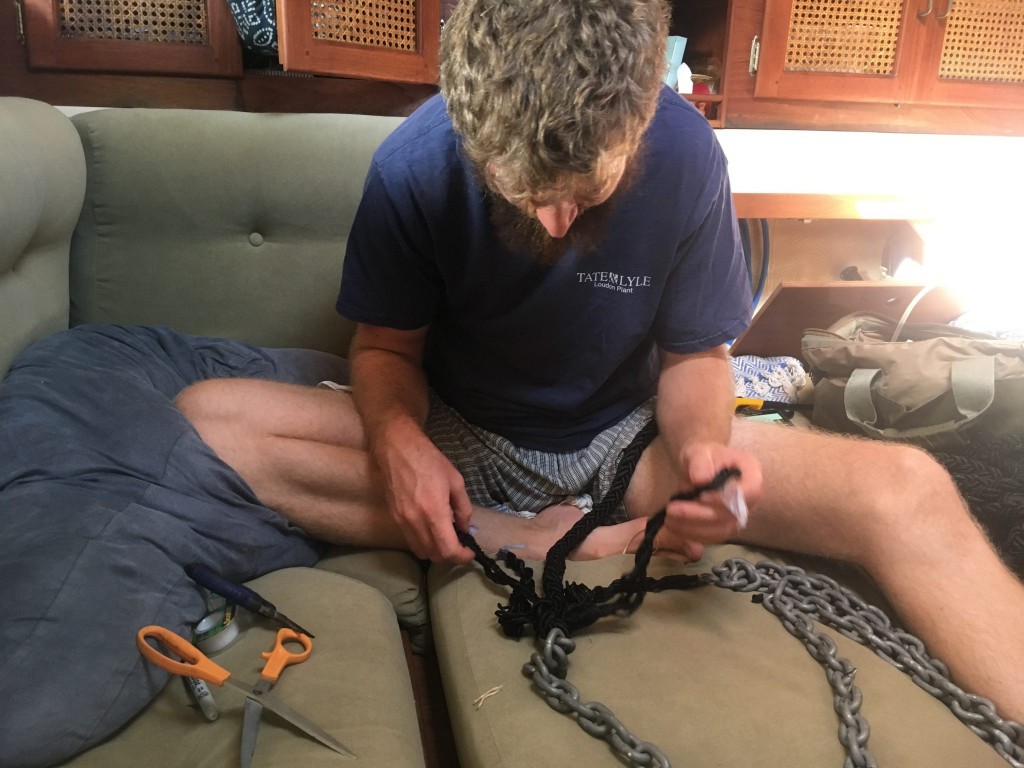 Here is the finished splice.  It is called a back splice. The tips of the rope are supposed to stick out so that we can monitor the splice and make sure it’s not slipping under load. 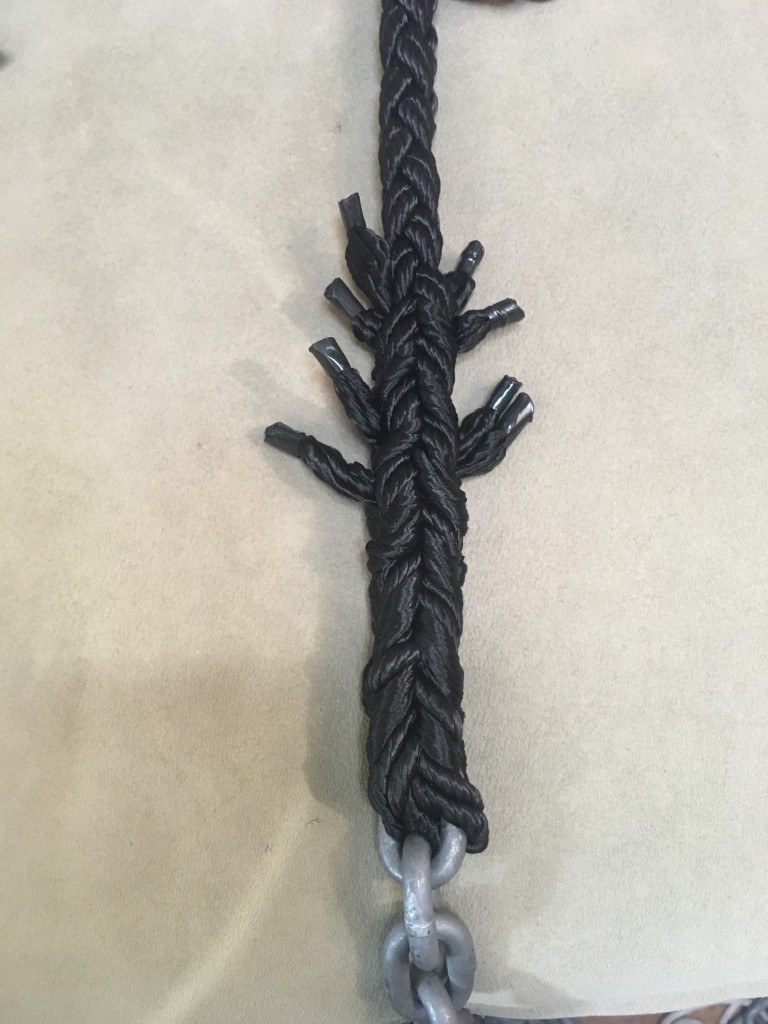 We switched out our anchor in the middle of Mobile Bay.  When we came back to Fairhope to grab all our goodies, we didn’t really want to stay the night at the yacht club again since we were just there so opted to anchor just right outside of the inlet.  We were there for a total of three nights.  The first night was ideal, light winds and no waves made for a great night and with the new anchor we felt even more secure.  On our second night the winds started to pick up, and is was blustery. I would estimate the winds were blowing 15-20mph.  The gusts were coming out of the west, so the waves had time to build across the bay and we were rocking the boat up and down really bad. I could not sleep at all that night, even though the anchor didn’t budge.  The last night anchored outside of Fairhope was our worst night yet! 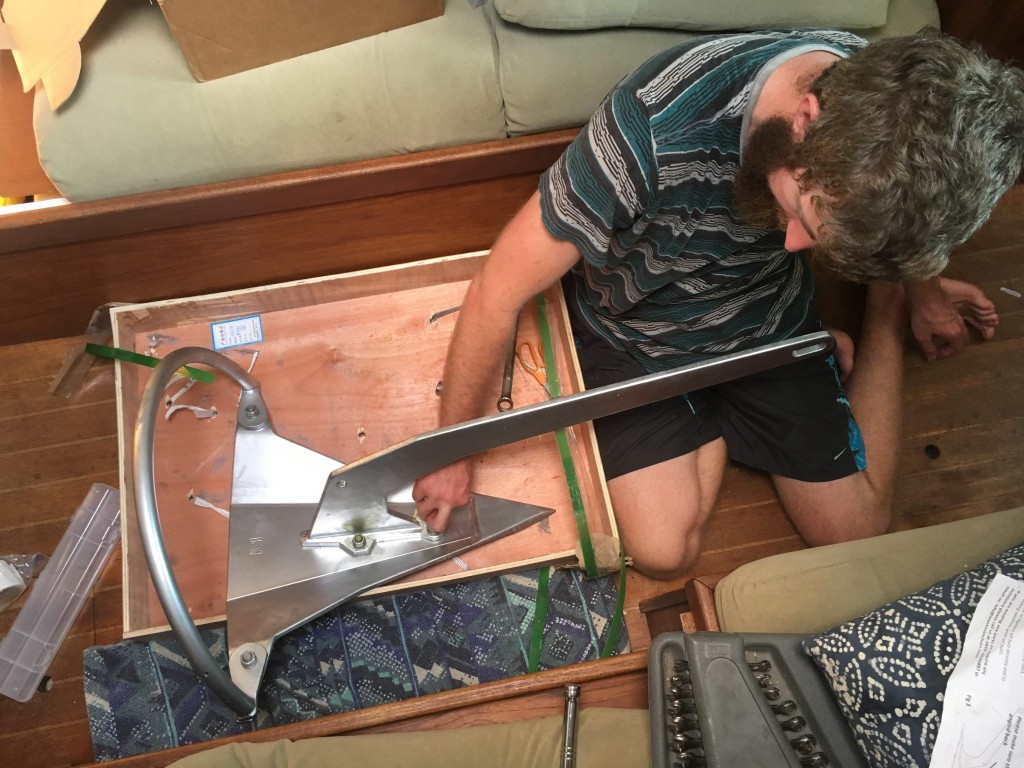 We planned on leaving the next day, so we took the opportunity to shower at the yacht club facilities.  We got in the dinghy, motored over there, washed ourselves, and headed back.  Well the waves were big, really big.  When we got to the stern of the boat we would be at the same height of the back of the boat at the top of the wave, then be halfway down by the rudder.  So these drastic height drops had me intimidated to tie off and get on the boat.  Since I sit in the front of the dinghy (usually) it’s my job to tie us off.  And I did a bad job, I just looped the rope loosely over the cleat, instead of going in and around.  I announced my poor tying job in anticipation of fixing it as soon as I safely boarded, and if I forgot hoping Erik would remind me.  Thirty minutes later while we were sitting in the cockpit (because that was the most bearable place to sit in the howling wind), Erik looks back and says, “Where is the dinghy?”.  My heart sunk.  We lost it.  It was my fault.  Our new beautiful perfect dinghy we love so much with our great outboard that starts on the first try.  Gone at sea.  We panicked.  After grabbing our spotlights and scanning the horizon for it only to see nothing, I called Eric Lacey.  I don’t know what I was expecting him to do, drop what he was doing and put his boat in the water and go on a wild dinghy hunt in the middle of the night.  But he gave me great advice.  He asked where we were anchored, I told him north of the inlet.  He asked which way the wind was blowing, I told him ENE.  He told me to start up the boat and go back in the inlet, but park at the dock on the opposite side of the yacht club (the north side), and to start walking the beach.  So we did.  Keep in mind the wind is blowing like 15-25mph on our butt but Erik docked like a master.  After we tied up we grabbed a couple spotlights and headlamps, and started walking.  It was great the first 100ft, but then we started coming to peoples private property where there were piers and sea walls.  I decided to go back to the boat while Erik continued walking.  He said he had to wade waist deep to get around some of the sea walls, and with the waves crashing on them it got quite hairy.  After walking about a mile he found it! Glory be, praise Poseidon! We were anchored in just the right spot, and the wind was blowing in just the right direction.  Never again.  To be fair… Erik has forgotten to tie the dinghy up twice! But this was when we were still at concord yacht club on Loudon Lake, and kind folks brought it back to him after it drifted a few feet.  So I guess I needed to learn my lesson.  Priority number one is always make sure the dinghy is tied up good! I am forever grateful we found it. 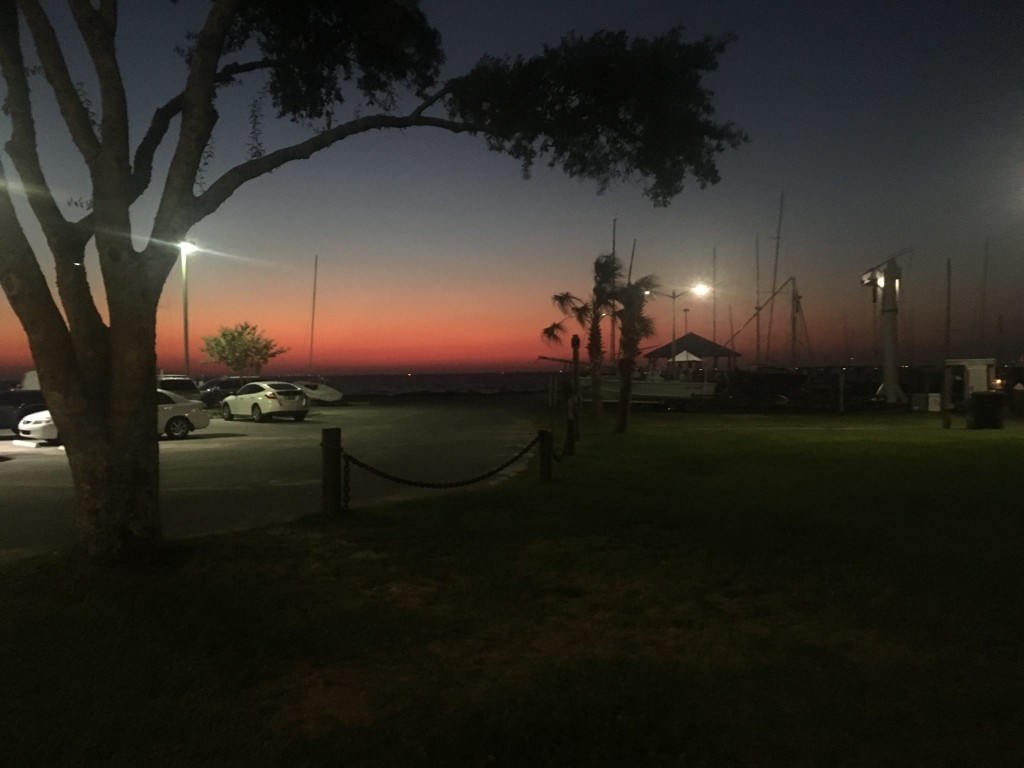 sunset from the yacht club right before we lost the dinghy, you can see how windy it was by looking at the palm trees

So after that extremely stressful evening, we decided to just stay tied up where we were and get an early start before the marina staff came in.  It was an emergency, we didn’t use any electricity or water and I think we did the best we could do.  When we woke up at 6am, the conditions weren’t any better.  The wind was still blowing into the inlet.  The inlet is only about 50ft wide so we thought long and hard how we were going to get out.  We used a stern line wrapped around a pole as a pivot point, as we tried to swing the nose out.  The rope got caught up a bit, we untangled it, and continued making the turn.  We had to put it in reverse as we almost put the nose into the dock on the other side, but somehow Erik got us out of there unscathed.  He gets an extra plus ten on skill set. I was so impressed with his ability to maneuver us in those high stress situations.  So once we are out of the inlet, we head about a mile east before cutting south where we raise the sails.  We sailed the rest of the way down mobile bay, as the winds finally started to ease up.  They were about dead by two in the afternoon, about the time we needed to pull them in to navigate the intercostal waterway. 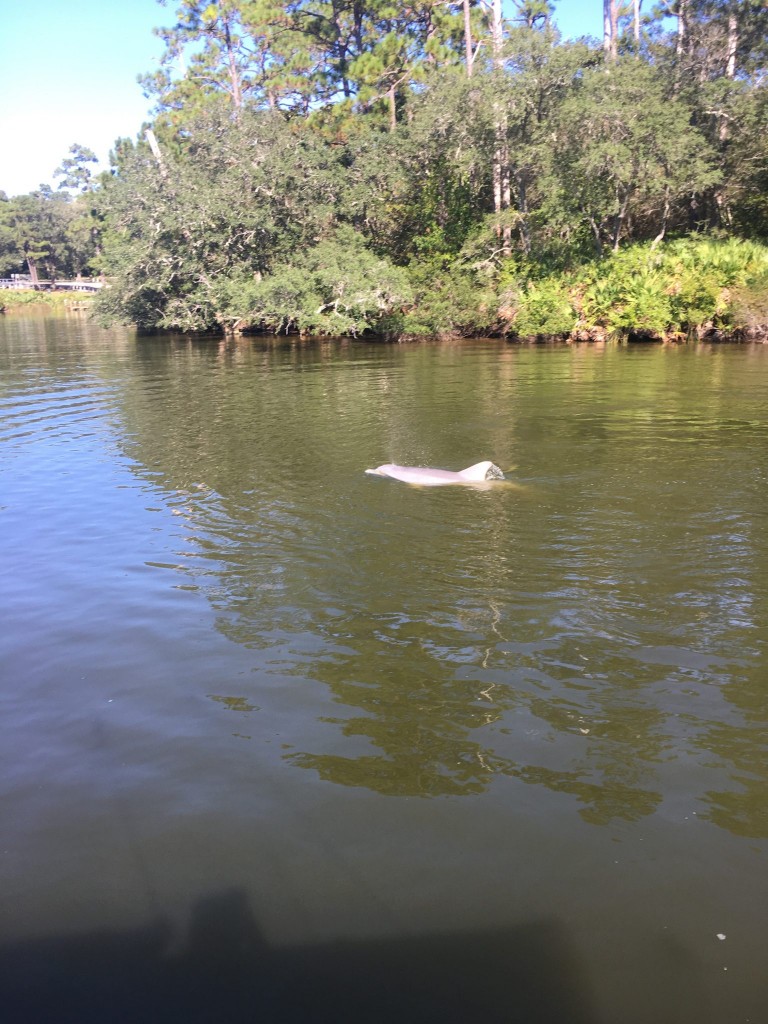 dolphin at our anchorage in pirates cove

The anchorage we were headed to was called “Pirates Cove” by the Lacey’s and “Roberts Bayou” by Active Captain.  It was recommended to us by them and it was a great, well protected anchorage!  It was a little busier than Erik and I were used to.  There were 3 sailboats rafted up, 4 more sailboats anchored, a trawler anchored in the middle of the channel, and more boats kept coming! We navigated past all the boats and dropped anchor off by ourselves.  The reason this was such a popular spot was because it has one of the coolest beach bar/restaurants I’ve ever been to! It was great sand, and small boats beached right up next to the restaurant.  They are famous for their burgers and bushwhackers, yum!  We got to try these out when the Lacey’s brought down their boat and took us there.  It was dog friendly and their pup, Dutch, was the most handsome of all the dogs there. 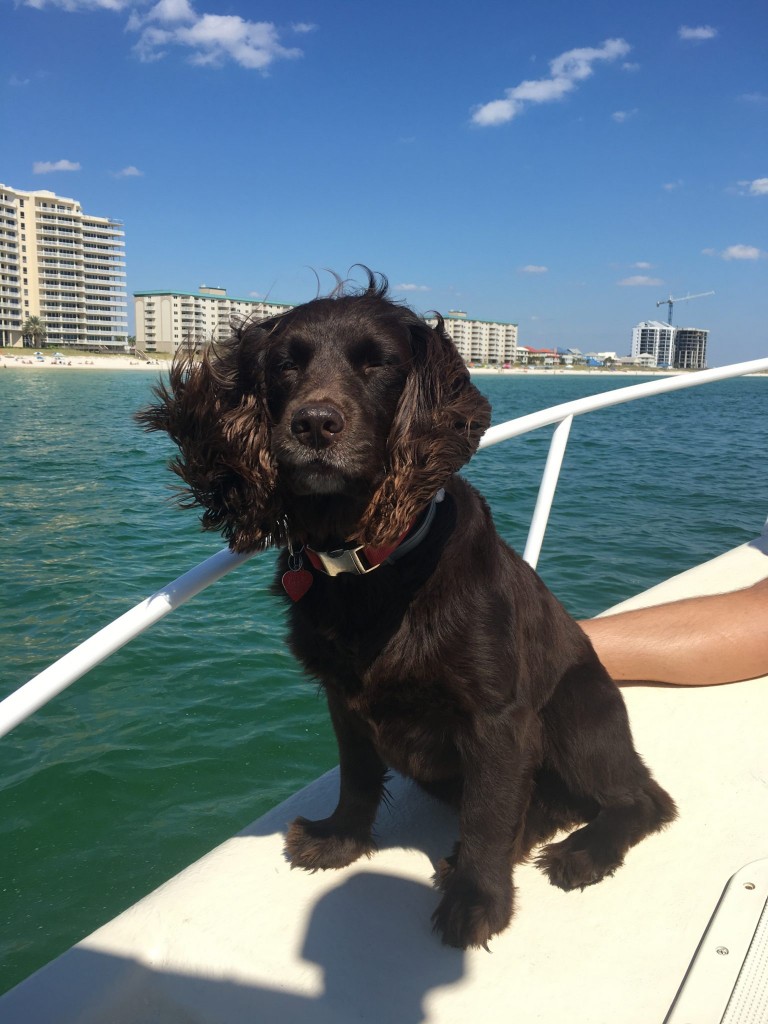 Dutch is the most handsome dog in all the land

After we were stuffed of burgers and bushwhackers, we headed off in the direction of Pensacola.  Eric Lacey showed us some of the best spots to anchor, we swam in the crystal water, and the day was sooooo gorgeous.  Stuff that dreams are made of.  We had such a great time. 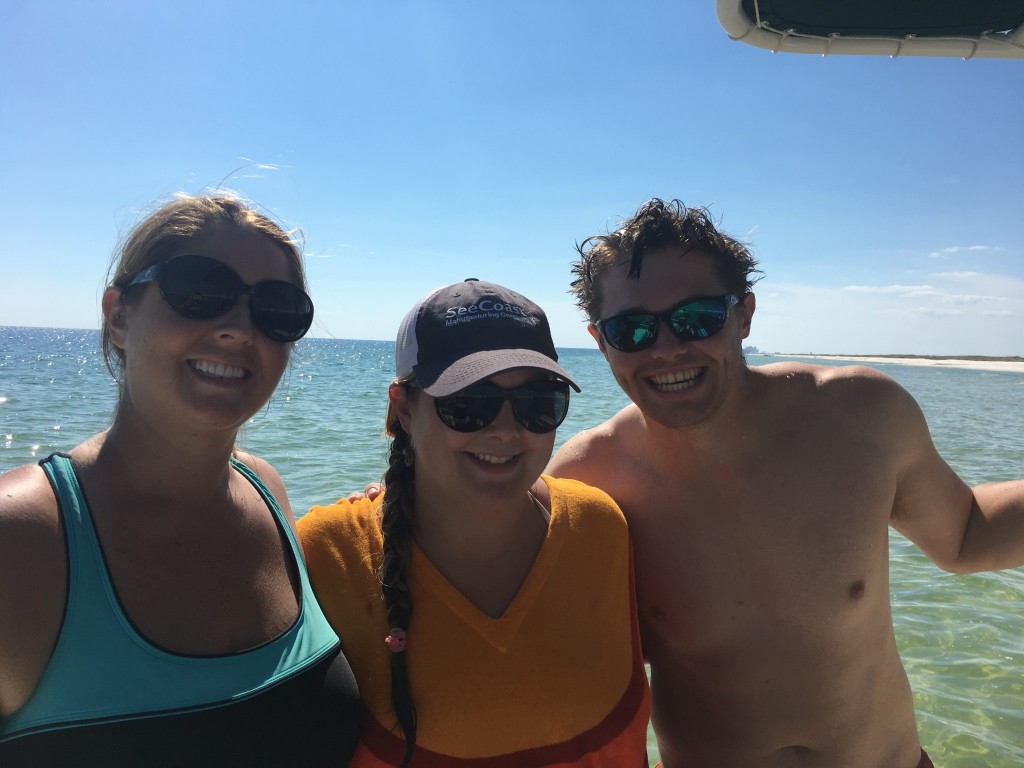 Me, Sarah, and Gus having a great time on the Lacey’s boat!

We were exhausted after a full day of adventuring on the emerald coast and slept well that night.  We spent the next day checking maps, cleaning, and prepping for our next move down to Pensacola! 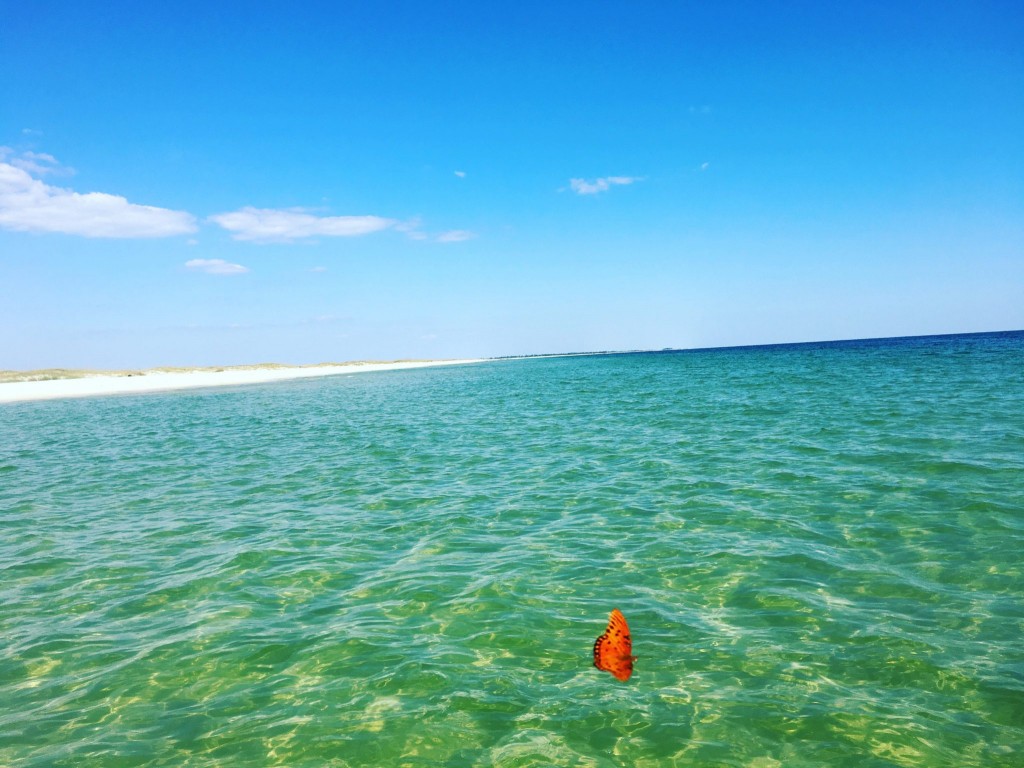 I was just snapping photos of the beautiful sand and water, didn’t have any clue a butterfly was nearby! One of my favorite pics! 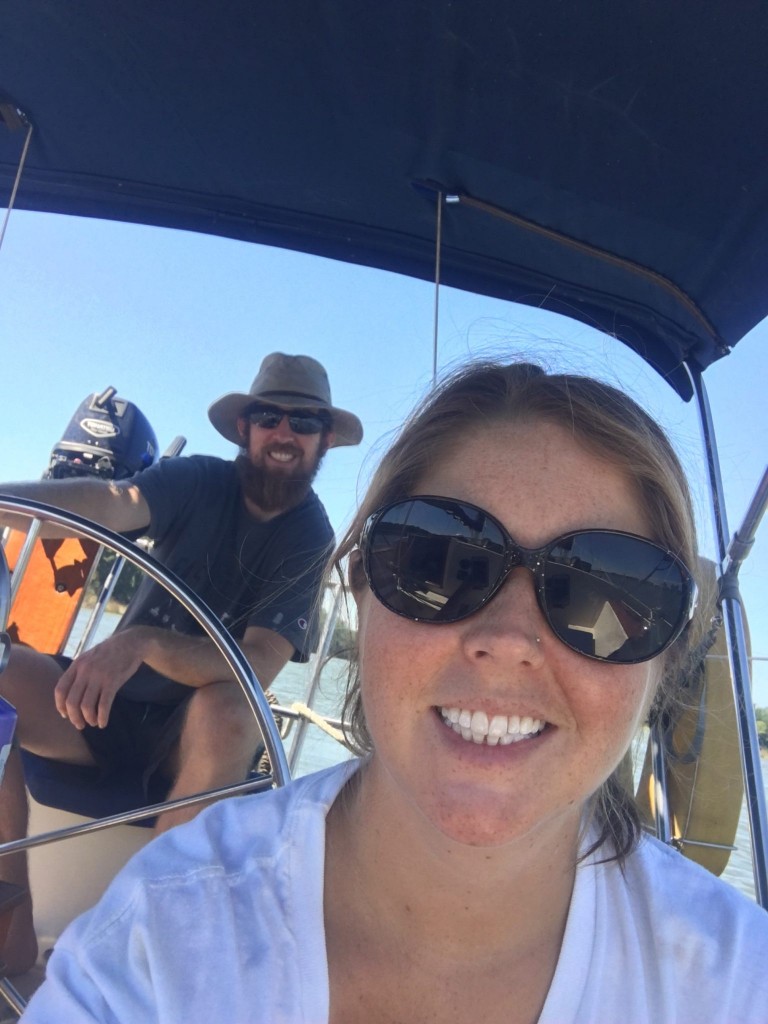 , so we can take Sammy to shore without fear of him running into the bushes never to return.  He doesn’t mind his harness at all and is a decent walker, as decent as any cat is on a leash I suppose. 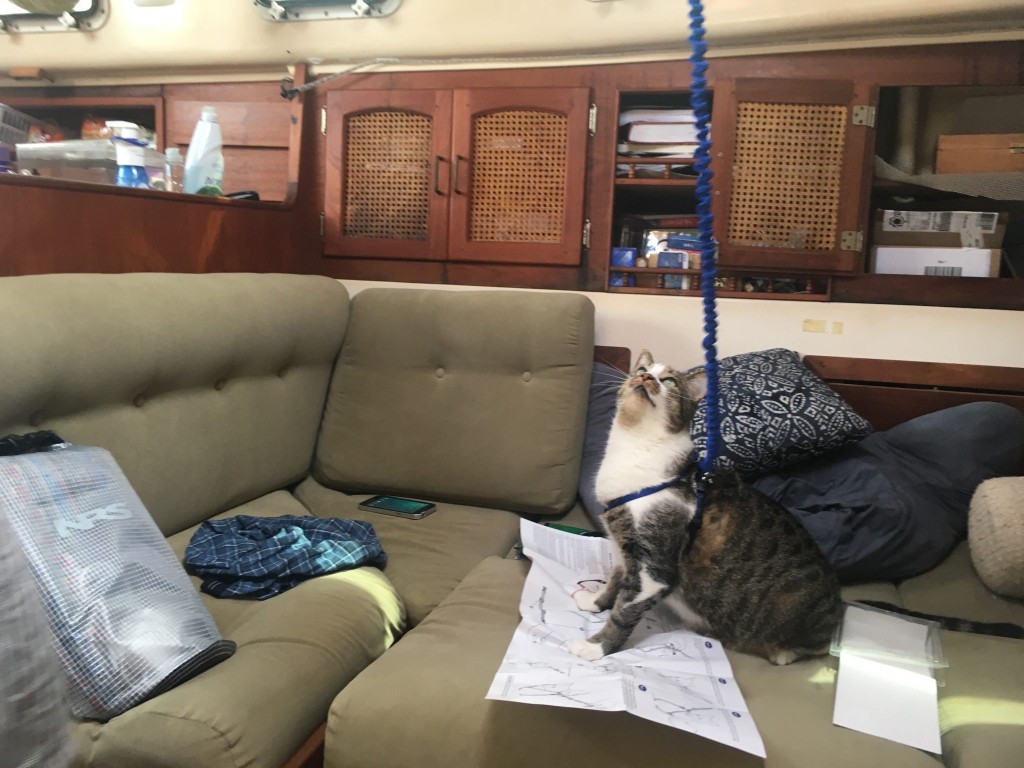