Living on a boat at anchor every night can get pretty dicey if you don’t have a solid connection to the seafloor! We eventually decided to get a 45lb galvanized Mantus anchor

, and here we’ll review some of our thoughts and experiences in arriving at that decision, as well as give a review on how the Mantus has treated us so far.

The early days – CQR vs Danforth

We started off on our trip from Knoxville, TN to Mobile, AL with a 25lb Danforth on the bow roller, and a 25lb CQR stored away. Most of the river bed is mud bottom, which is where the Danforth excels, providing high holding power for its weight. It worked well for several nights at anchor on the way to Chattanooga. We ended up stuck in Harrison Bay State Park (check out the link for CJ’s blog post on that time) for a month waiting on the Chickamauga Dam lock to complete repairs, and this is where the Danforth ran into its first problems.

We had been anchored in the bay for a week or two at this point, so we were fairly confident that our anchor was set. However, a thunderstorm rolled in while we were away from the boat so we hurried back. After the last bend in the hiking trail back to the boat, we looked out out on the spot we had left the boat and it was gone! My heart stopped for a moment. We hurried to get a view deeper into the cove in the hopes that it was there and not drifting out in the lake somewhere. We got relief when we spotted it, a bit too close to shore, but looking no worse for the wear. Luckily the keel had stuck itself gently in some mud and weeds so the hull wasn’t rubbing on the shoreline. 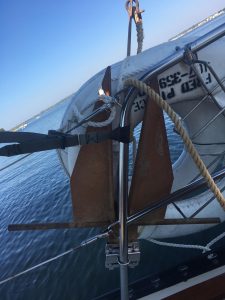 You can see how a stick could lodge itself in the Danforth’s split fluke.

We hopped in the dinghy and headed over. CJ got on the sailboat to steer and I used the dinghy to pull us out into deeper water (we didn’t want to use the inboard diesel incase the propeller was at risk of hitting a stump or something). Upon pulling up the anchor, we saw a stick had lodged itself between the two flukes of the Danforth anchor! Thinking the incident was just a fluke, we cleared the debris from the anchor and put it back into service.

It wasn’t more than a week or two later until another decent wind came. CJ looked outside and told me we were drifting quickly! This wasn’t a slow drag, we were moving like we didn’t have an anchor down at all. I jumped in the dinghy, started the motor, and dragged us back to the middle of the cove. When we pulled up the anchor this time, there wasn’t even a stick involved, the anchor and simply gotten twisted up in its own rode. I’d had enough! The Danforth was demoted to a secondary anchor on the stern rail. 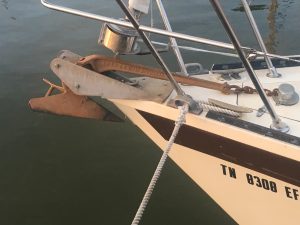 CQR on the bow roller

The CQR has less ultimate holding power than a Danforth in soft bottoms, but its simple plow shape is less likely to be fouled. When anchored for several days, wind shifts can cause any anchor to unset when the direction of pull is changed 180 degrees from where is was set initially. The anchor needs to be able to reset itself quickly in the new position without getting tangled up on something. The ultimate holding power is less likely to be an issue (though we have experienced this as explained later).

The CQR served us well for the rest of the trip to Mobile Bay. We did notice that the CQR seemed to take a bit longer to get its initial set than the Danforth, but it never fouled and had a complete failure to set like the Danforth did.

Time for an upgrade!

Upon getting to the coast, the 25lb CQR was looking a bit wimpy for our new conditions. Most recommendations on CQR anchor weight for a boat our size in storm conditions were in the 35lb-45lbs range. However, there exists a newer anchor design which most people consider objectively better, so rather than simply upgrade our size, we chose to upgrade the design as well.

The new generation anchors such as Mantus, Rocna, Manson, and the like have one large fluke, more like an oversized Danforth fluke with no split in the middle, than the plow of the CQR. Often, they are accompanied by a roll bar to assist with setting if it lands upside down initially. I scoured the internet looking for information on which would be the best performer and found a great series of videos by SV Panope in which he subjects various new generation anchors to a series of tests. Here’s one of his videos of the Mantus:

If you watch his other videos, including a 40 minute compilation video reviewing several anchors (Mantus, Bruce, Spade, Manson Supreme, Sarca Excel, Super Sarca, Fortress) vs eachother, you’ll see the Mantus perform extremely well! It looked to me that the Mantus was the best performing setter. He did have some reservation on the thickness of the shank, however I feel like trading some weight in the shank for more weight on the penetrating tip for a more reliable set is a fair trade. Also, if the anchor gets pinned on some rock or coral and the shank bends, the bolted design makes it easy to just replace the shank rather than having to replace the whole anchor. Mantus has a lifetime warranty and claims that they will send you replacement parts anywhere in the world, should this happen. 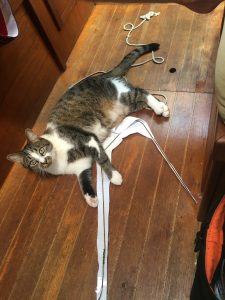 The folks at Mantus have nice templates on their site so that you can see how the anchor will fit in your bow roller, and see if you might need their Anchor Mate product in order to make it fit well. Unfortunately we don’t have a printer on board and I wasn’t sure if the template was showing up on the screen in actual size, so I found it easier to use their published dimensions and a diagram to approximate angles for a hand drawn model that I taped to a coat hanger wire to give it stability. Sammy liked it! It looked like it would fit well so we went ahead with the plans.

We ordered our Mantus anchor while at Dauphin Island, AL, and had it shipped to friends in Fairhope. It arrived in a nice sturdy crate with a slim profile (and reasonable shipping fees) thanks to the bolted design. 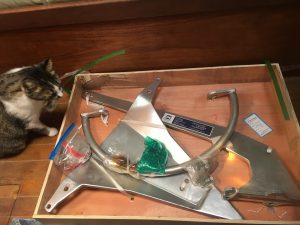 The anchor came with basic instructions for putting it together. There’s not much to it with only 6 bolts, but the instructions did specify to put the bolts in from below so the nuts are facing up. It might be obvious to others, but we didn’t really notice that 2 of the bolts (the ones for the rollbar) were slightly shorter than the other 4, although in hindsight I do believe they were in a separate baggie. The shorter ones are meant to bolt the rollbar on. They’re too short for the shank connection. The kit also comes with little baggies of lanolin to grease up the bolts before putting it together, which can be a bit messy! 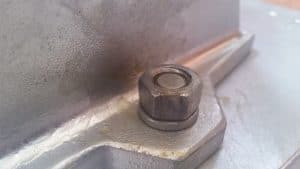 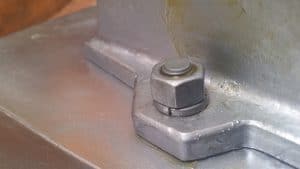 This is correct, notice the extra length out the top. 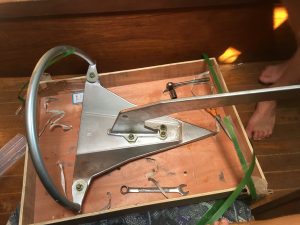 We’ve been using the Mantus anchor for a month now and have had a great experience overall! The anchor sets faster than the CQR, and more reliably than the Danforth. However, we did have one situation at Little Sabine Bay in Pensacola, FL where the ultimate holding power came into play.

Winds were forecast to be strong over the next few days, so we found an anchorage on the map that looked well protected from any angle. We arrived and there was less space to anchor than we had imagined. The area was basically surrounded by private docks on the shore and shallow water toward the middle. We only had room for 3 to 1 scope. I set an anchor alarm initially but after the first day turned it off because of false alarms. We hadn’t moved during 20mph winds and there was no wave action so I figured we’d be fine. Big mistake…

CJ woke up in the morning while it was still dark and noticed we had drifted 20 feet or so and were now only about 15 feet from running into a dock! The wind was blowing at 30 mph. We got the engine running and motored back into position. When I pulled up the anchor I noticed it was caked with very soft mud. The mud was so soft that the 30mph wind had enough force to slowly drag the anchor through the muck. There was also a small piece of trashbag stuck on the anchor but I think the soft, silty mud was the major factor.

This isn’t a fault of the Mantus, as I believe any other anchor its size, perhaps excluding a large Fortress anchor, would have dragged in those condition. Our small CQR and Danforth probably would have dragged even faster, or disengaged entirely from the seafloor. Since then we’ve learned to think more about the composition of the seafloor, and we also prefer to anchor in more exposed areas where we have room to let out more scope. If the anchorage hadn’t been so tight, we might have not even noticed a 20 ft drag, but in those close quarters it was a big deal.

Update: We cruised for over 3 months (Dec-April) in the Bahamas, spending every night at anchor (didnt spend even 1 night in a marina!), and the anchor did not drag even once. We’ve been very pleased!

We’ll update this post further if we have any new developments to share in our Mantus anchor review!

The Mantus Anchor is available at this amazon.com link