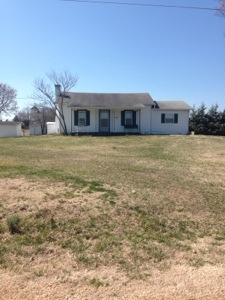 Well here I sit in a midst of chaos anticipating our move! Yesterday the previous tenants moved the last of their stuff out so we got to go over and inspect it and start cleaning.  I took a carload with me to unload over there and wanted to just really take it in and get a sense of where I would like OUR stuff to go.  I think that is what I am most excited for… When we first started living together I moved into HIS house.  He had it arranged the way he wanted with his stuff where he wanted it, and when I moved in I felt like I had to slide some of his stuff around to fit all of mine! It’s been jam packed in here ever since.  So it will be very nice to be able to stretch out a little big more in a bigger place that will be OURS.  I moved in over 6 months ago and when I came I really tried to downsize, now it is Eriks turn 😉 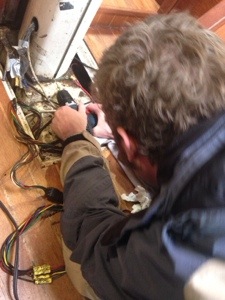 This previous week was Erik’s staycation.  He had vacation time he had to use before the first of April and with so many projects on the boat it was a perfect time for a staycation.  As I previously mentioned the project that was to be tackled first is the core repair for the soft spot… Well this weather sucks! It’s been rainy, overcast, on and off again cold and warm.  The epoxy needs a minimum of 60 degrees F to set properly, and with the days getting up to 60 but the evenings dropping to 30-something we decided to hold off and do it when the weather is cooperating.  But don’t worry, Erik didn’t have any problems finding other projects to work on! Above he is drilling a mast drain! 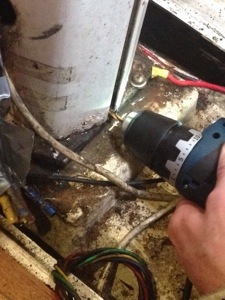 A mast drain? WTF? Well when water seeps down the interior of the mast, there is supposed to be a small hole to drain it out and into the bilge.  In the picture above you will notice a hole in the top left corner where some wires are coming out of.  That my friends is where the water was sloshing out of.  Erik actually found this when he decided to fool around with the mast wires.  They run from the top to the bottom where the exit from that hole.  When he pulled them out he realized what was going on! There is a dark spot where there was obvious water damage but I had assumed it was from the soft spot leaking into the interior but it was actually from the improperly drained mast! Luckily Erik had heard of this problem before (not sure why people would make masts without a drain but I guess it happens) and the simple solution is to drill a hole so the water can drain.  Well we sure did drill a hole! And water came out! And then it stopped? Greatttt there was still water in there, we could see it, but it wasn’t draining.  Erik drilled a little more, a little more water came out, and then it stopped.  Poking around down there he came to the conclusion that it was clogged  with debris so off to the store we went to buy a turkey baster! We spent a pretty good amount of time squirting water in and out and tons of goop drained out of the hole, you can kind of see in the picture all the mud by the hole. 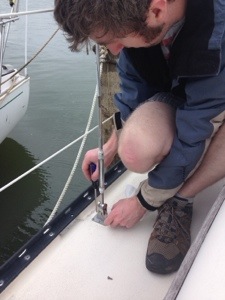 Erik also re-bedded the chain plate knees.  Those are the little metal brackets that help hold the mast.  They were leaking slightly.  Erik may want to replace these in the future to where they sit on the exterior of the boat instead of being on the interior, but for now they are not letting water in.  He still has a few more to do. 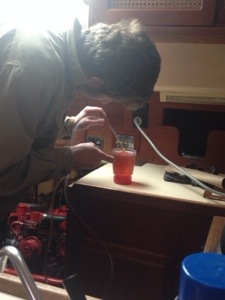 On another day we fixed the engine! The parts from where it was leaking earlier came and with a little help from me (yay I was finally useful) Erik replaced them.  We haven’t actually tested them yet, we are waiting on a day when we can actually take the boat out for the first time! (that day was overdraft, windy, and almost dark) We had to run to a parts store to grab some more antifreeze for the engine and grabbed a siphon tube too so Erik could take a sample of the diesel fuel to check for sludge buildup. Doesn’t he look like such a chemist 😉  I am so lucky to have him! PS- fuel looked fine. 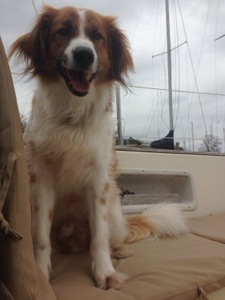 And we finally brought Bryson to the boat.  He hated it.  I was actually surprised to see him get on and off with no help, but once he was on he whined and just sat outside staring in (I would’ve tried to convince him to come in, but it was chaos down there).  And so now I’m going to tell you about the one thing that breaks my heart about all of this.. We won’t be able to take Bryson.  When I first sat down and thought about it, I was adamant that Bryson would indeed be coming with us.  He is my one and only, my reason for being, my best friend.  There’s no way we would leave him.  Then I started thinking about what this would mean for him… long hours cooped up on a boat, no room to run, no green grass to pee or poop in, hours of being poked and proded to make sure he was healthy (think about all the  customs regulations), hot and humid temperatures.  Not to mention… HE HATES THE BOAT.  When we were sailing around on the smaller boat this summer we would take him with us and even took him on an overnight camping trip.  He was nervous the whole time, awkward, and whined when we jumped in to go swimming.  It slowly started dawning on me that he would not be happy.  And now to be selfish and think of what it would mean for me if we did take Bryson… I couldn’t be gone for more than 10 hours (no backpacking or camping overnight without him), every time we would go to shore he would have to be transported via dinghy, I would be responsible for knowing every customs law for every country and make sure he was up to date on every vaccine known to dog kind, and our small space really didn’t have anywhere for a dog bed. But we still have a lot of time before we leave; I can probably spend the next 2 years with him.  I have given him a wonderful life and will make sure that every day I spend with him until I leave will be the best.  Believe me I feel guilty, but when I got him 5 years ago this was something I never could have fathomed would be happening to me.  I have had a lot of people who have volunteered to watch him while I was gone and if he keeps being as healthy as he is now, he will probably still be doing his doggy thing for ten more years (I hope!).