After spending all day sailing, we made it to Chickamuaga Lake.  We scanned the maps and picked a cove on the north side of Harrison Bay State Park.  It was a nice scenic little cove over looking the golf course and it was closest and it was getting dark. The next day and Erik and I spent exploring all of the bay in our dinghy.  We found Harrison Bay State Park Marina, another marina across the way, found at least 3 good coves, and sorta checked our phones occasionally for wifi. 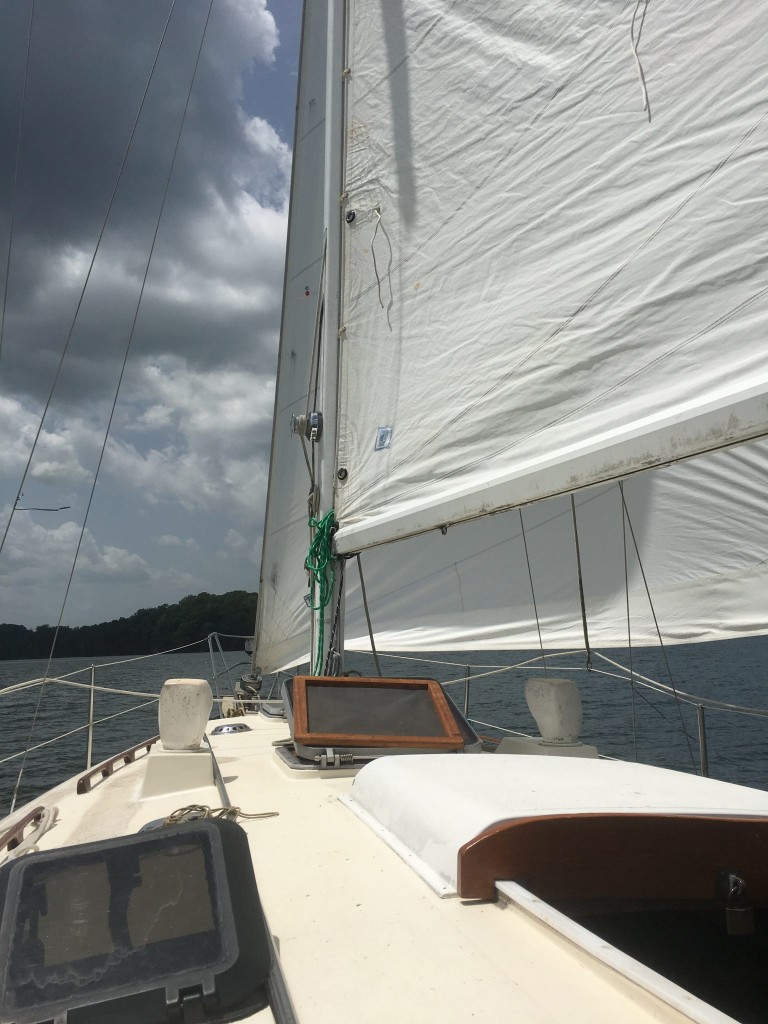 We ended up anchoring in Little Dog Leg Slough which was the perfect spot! It was a deep cove and protected us on three sides.  We used the dinghy the first day to explore the marina at Harrison Bay State Park and found a hiking trail.  The trail actually went right by the boat and we found that we could row about 20ft and then hike in about a mile, which was a great way to stretch our legs. 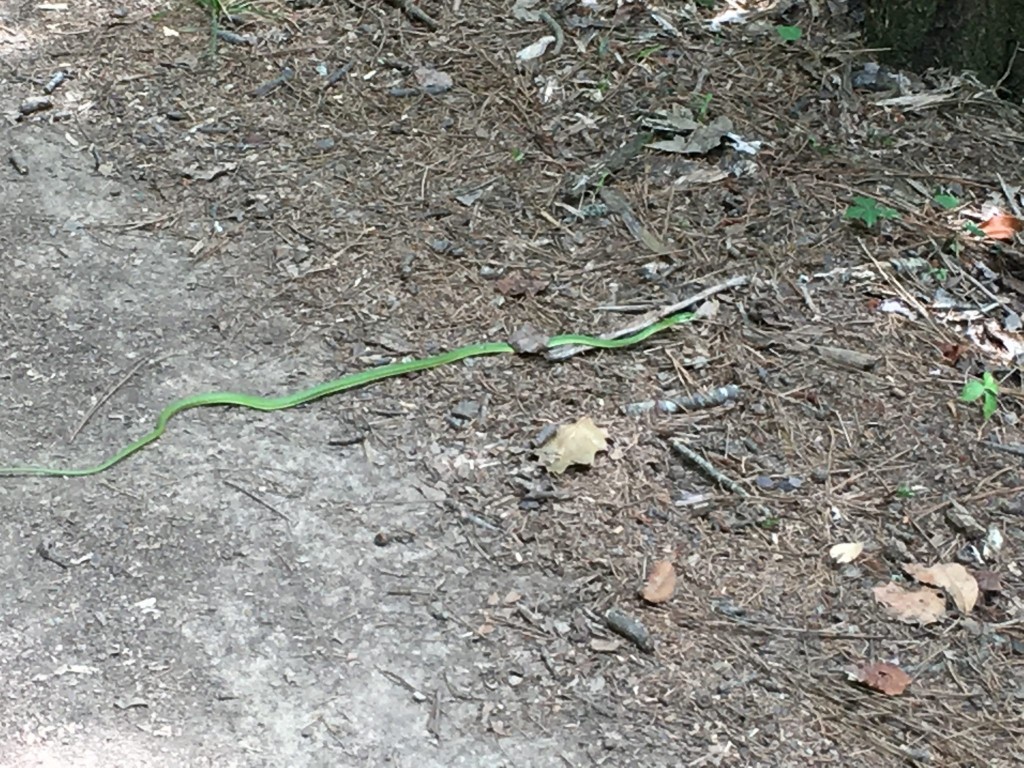 We still used the dinghy when we needed groceries, laundry, or were hauling other heavy items.  Pete and Teresa brought us the car, and Erik’s sister and boyfriend came for a visit too.  Well I really screwed up big time when they were here… I was excited and distracted I guess, and when we walked the trail to go get them I left all of the hatches open.  And of course it downpoured while we were out.  Ohhhh it was a lot of water. I learned an important lesson about how fast storms can pop up.

We were able to use the car to fulfill all of our fancies and explore downtown Chattanooga and the surrounding areas! We usually tried to get off the boat every 2-3 days, usually because the heat was so bad. We went through a pretty bad heat wave with highs up to 98* some days.  When it hits and you’re on the boat the only thing you can do is jump in the water.  It was really discouraging to cook as well, way too hot to use heat! Luckily it was only bad for a week or less.  We have found 84* or lower to be ideal for sleeping. 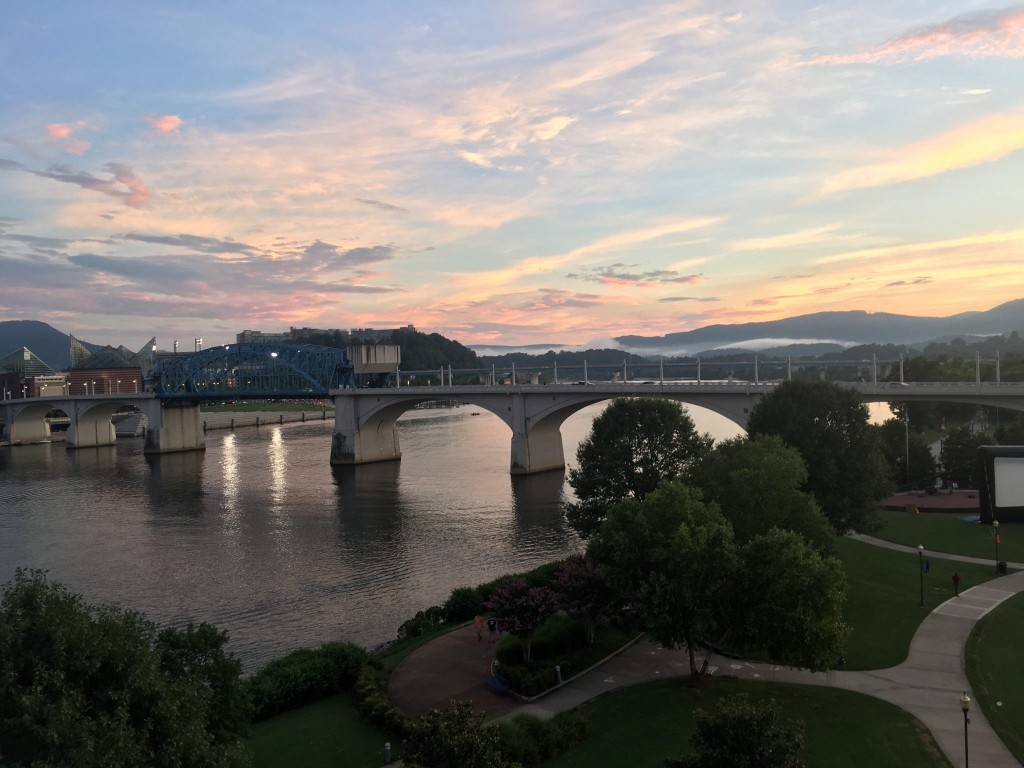 downtown chattanooga sunset with fog on the water. so pretty!

Speaking of cooking, our mothers have been concerned about what we are eating so I figured I would show off some of my handy work in the kitchen! Beans and rice are our main staples, and I try to creatively combine them in different ratios and flavors to create something tasty. Add whatever fresh veggies we have (cabbage has lasted the longest for us, so usually cabbage) and maybe a can of meat and its a culinary masterpiece! The hardest thing has been cooking just the right amount for 2 people with no leftovers since we don’t have a fridge at the moment.  Luckily Erik is a human disposal and will usually finish off the extras by the end of the day. 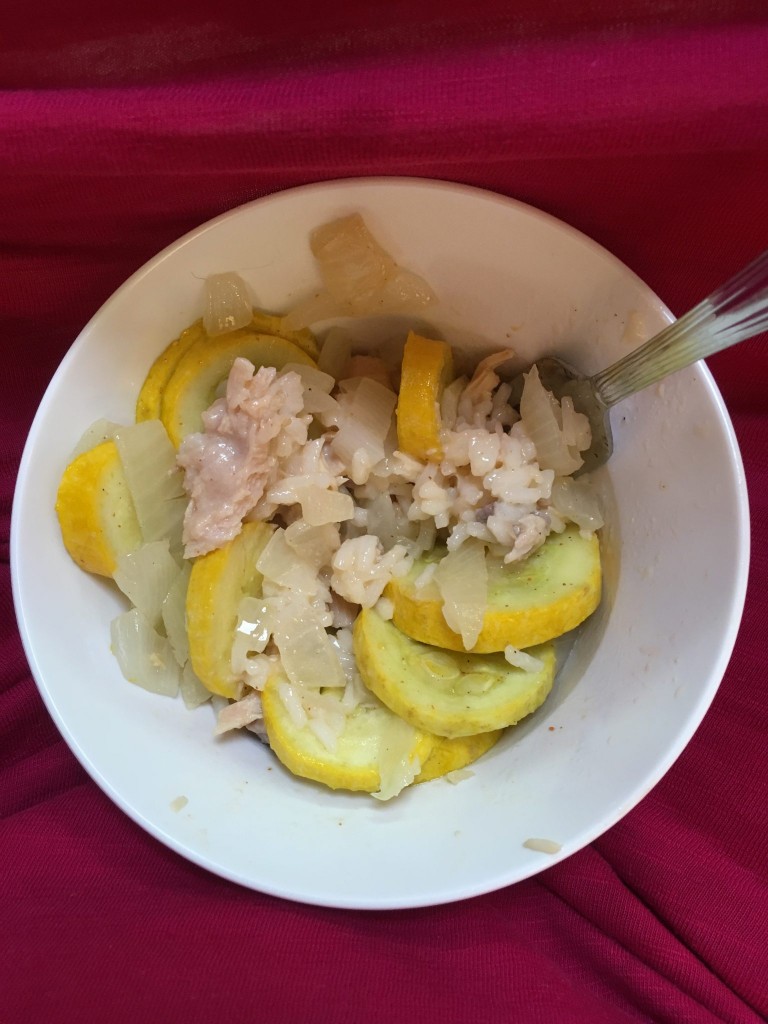 Sautéed onion and squash over a bed of rice with canned chicken and a creamy yum yum sauce.

Ive been cooking with a pressure cooker which really helps cut down on cooking time, which is not only saves time but also saves fuel (alcohol) and heat (too hot). 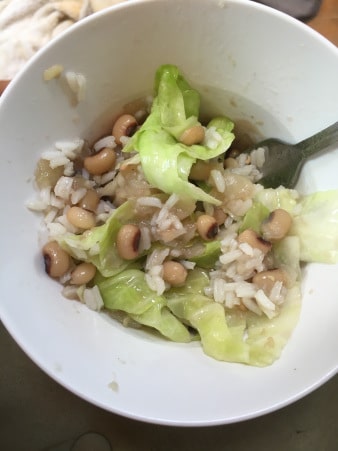 I sautéed the onion first in the PC then added black eyes. Once cooked I threw in chopped cabbage and served over rice.

And here is my domain after a typical night.  The large wooden outline on the left in the counter is our “ice box” which we plan to convert to a fridge (hopefully sooner than later!). On the left above ice box is paper towels and a sprout rack erik made.  Front and center is our non pressurized alcohol Origo stove, which I have really enjoyed, with dishes drying on it.  And on the right is our fish, Prince, and the sink.  When we sail Prince can fit in the sink. 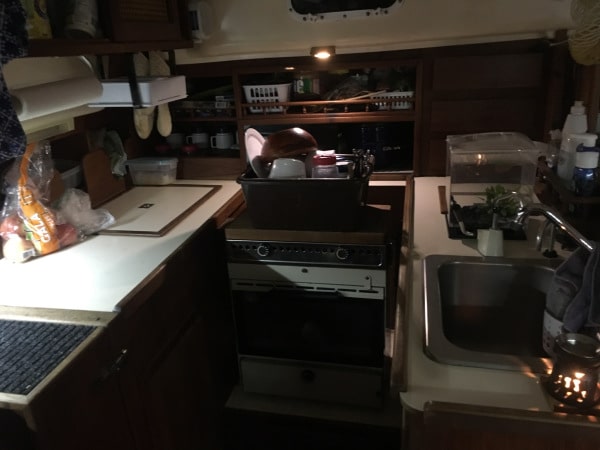 We were able to knock out a few boat projects while we were here.  Our pressure water pump stopped working the day we left Knoxville, so we took care of that.  It had just lost its prime after we ran the tanks empty and just needed to be primed.  We also were able to replace/rebuild our Jabsco manual toilet!  Since we have had the boat we have not done any toilet maintenance, and things like replacing the joker valve are recommended every so often.  Plus there were tiny drips (of clean water, not poo water) from the pump box so every time you flushed a drop of water would come out with every pump.  So we replaced the gaskets, lubed the pump, and replaced the joker valve, and I can tell a significant difference in how well it works! 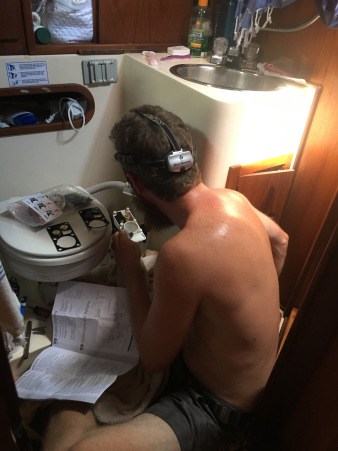 One day after a pop up storm we walked back to our cove via trail, but when we got to where we tied the dinghy off the boat was no where to be seen.  My heart sank.  I assumed it floated into the main chanel where the coast guard promptly impounded it for being a danger (I’ve got an active imagination).  It actually drug the other direction deeper in to the cove.  Erik the calm man with the plan assessed the situation and classified it as low risk since there were no tides, no waves, and no rocks.  He wanted to take this oppurtunity to test out how the inflatable dinghy and the 6hp outboard towed our 13,500lb boat. While I was having a mild panic attack as I envisioned a tornado swooping down from the formidable skies (there goes that imagination again) Erik slowly and steadily towed our boat back to a safe place.  He pulled up the anchor into the dinghy and pulled with the anchor line. A small branch was lodge in the Danforth anchor which fouled it and made it unable to correctly set.  It appeared that it had slowly drug, but we were still in about 10ft of water when we found it, so it wasn’t very fast.  We are in the market for a new anchor and plan to purchase one when we get to the coast (drool *mantus anchor* drool) 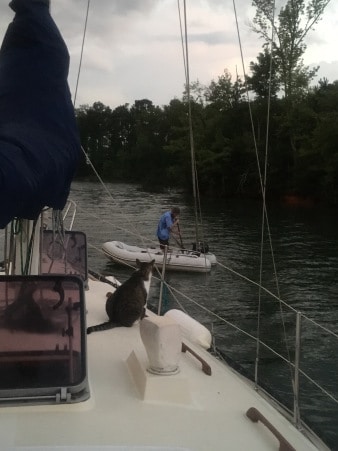 Erik pulling up the fouled anchor with the formidable skies looming in the distance.

After that fiasco my Dad came to visit!  He grew up in Chattanooga on Signal Mountain, and was a great tour guide! We rode around Signal Mountain, walked around downtown, and enjoyed the boat. 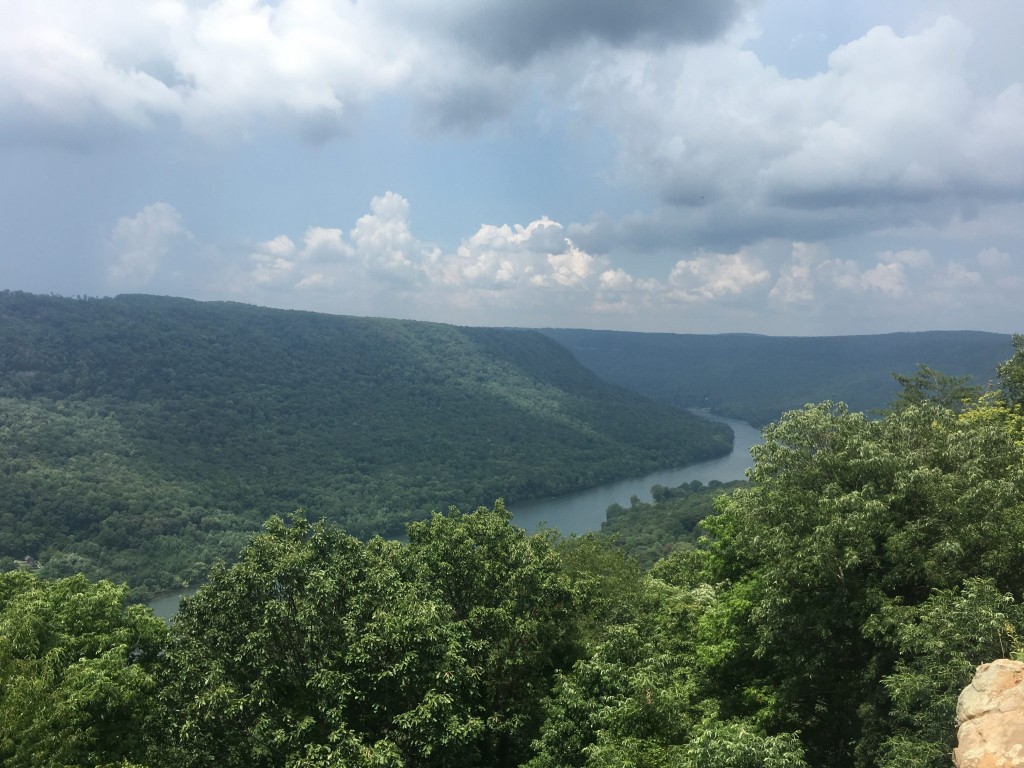 Here we are at a neat bluff with waterfall, though there was only a small trickle because of the lack of rain 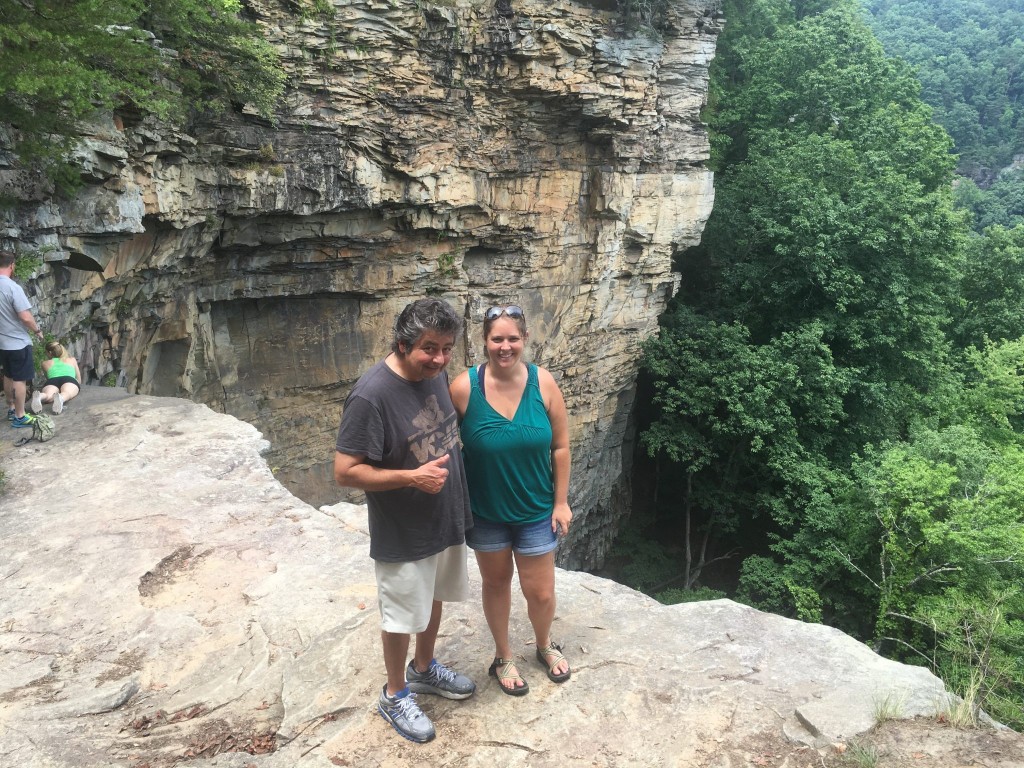 Well thats all for now! I still have more updates, but I am about a month behind.  This is partly due to finding wifi when and where we can, so stay tuned for the next update. 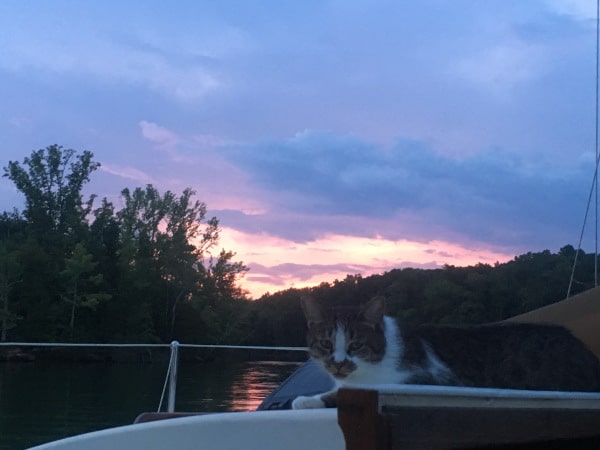 Sammy and the sunset