EPIRB (Emergency Position Indicating Radio Beacon) prices have dropped considerably in the past several years (about 3x cheaper than in 2006), and have become affordable enough to where there is not much debate that they are an essential piece of gear for a cruising sailboat these days. The question of which EPIRB to get took a bit more thought though. We eventually decided on the ACR GlobalFix V4 category II EPIRB

and in this post we’ll review our thought process on that purchase decision. 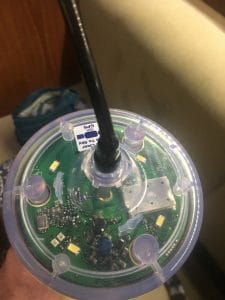 ACR vs McMurdo vs Ocean Signal

ACR ARTEX has been the leading EPIRB manufacturer for quite a while. When we started looking for an EPIRB and comparison shopping, ACR had recently released the GlobalFix V4, so it caught our eye first. Its ACR’s first EPIRB with a battery rated for 10 years, and is also user replaceable! In theory you could replace the battery once and get 20 years out if it, though I feel like after 10 years I may simply prefer to get a new one if prices continue to drop the way they have been. In previous models (GlobalFix Pro and iPro), the batteries were rated for 5 years, and replacement batteries were not sold to the public, so you’d have to send your unit in to the dealer for it to be replaced at a cost of several hundred dollars! This made the cost effective lifespan of those legacy units closer to 5 years, vs the 10-20 years for the new V4.

McMurdo claims a 6 year battery life for their McMurdo Smartfind Plus, and they’re not user replaceable. They also had problems in 2003 with their units not aquiring a GPS fix in real world conditions, and their reputation has suffered for it. To be fair, they claim to have recently scored a contract with the USCG to supply 16,000 PLBs, so that may help their reputation in the future. But with an equivalent price, less battery life, and the history of issues, I see no compelling reason to go the McMurdo route.

Ocean Signal produced the Ocean Signal rescueME EPIRB1 with a 10 year user replaceable battery well before ACR produced the V4. In fact, a few months after Ocean Signal released the EPIRB1, they were aquired by ACR. Almost a year later the V4 was released. I don’t know if the V4 was explicitly modeled after the EPIRB1, but I cant imagine its any worse engineered than the EPIRB1, having been developed with more resources and the benefit of hindsight. Since they’re basically equivalent on price, I went with the newer v4.

In addition to the advancement in battery storage life and replaceability, the ACR V4 is actually cheaper than ACR’s other models. However there are two potential tradeoffs that I noticed. 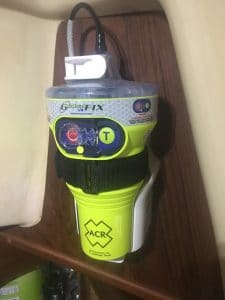 We went with the category II version, which means that we need to manually remove it from the mounting bracket in order to activate it. A category I version has a bracket which will automatically release the EPIRB when its submerged in water 4-14 feet deep. The auto deploy sounds nice, but it costs an extra $100 and the benefits are not as apparent on a small sailboat as it would be on a larger ship. To function properly, the category I EPIRB would need to be mounted outside where it wouldn’t get trapped inside the cabin. But if it was mounted outside, I’d be worried about breaking waves or a rollover releasing the EPIRB accidentally. The automatic category 1 brackets are also supposed to be replaced every 2 years at a cost of over $200 a pop.

We chose to mount our manual release bracket by the companionway hatch for easy access. It fits in a spot that looks like it was designed just for the EPIRB despite the fact that our boat was built over 30 years ago and I doubt EPIRBS were in wide use back then on recreational boats. 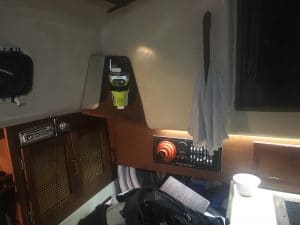 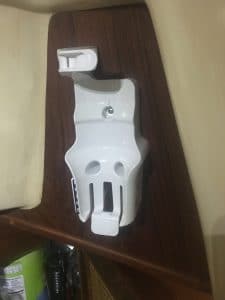 The V4 has test functions to ensure it’s working correctly. You can do the general test 120 times before battery life is overly affected, which gives you a recommended schedule of once a month for the 10 year lifespan of the battery. The extended GPS test on the other hand can be done only 84 times, which would be once ever 6 weeks. The software actually prevents any tests after the 84th time. This is not presented as a mandatory test by the manufacturer so you can skip the extended GPS test altogether or just do it once ever few months. The results of the tests are communicated through red and green leds.

In the event of an actual emergency, you slide the protective cover to the right, popping out a plastic tab (the witness seal, which helps to deter accidental activation) and press the red button for 2 seconds. Or you can simply remove it from its bracket (the bracket contains a magnet that prevents water activation while still attached), place it in the water, and the EPIRB will begin transmitting automatically. It comes with a tether wrapped around the beacon under the black strap. Make sure to attach it to you so it doesn’t drift away!

Prices change, so look around, but currently these are the best prices on the 3 EPIRBS discussed above:

All of these EPIRBs currently have manufacturers rebate offers going for about $50 off each so keep that in mind!

Also, if you visit any of our amazon links and then purchase anything within 24 hours (even something other than what we linked you to), amazon pays us a commission on the purchase. Thanks for supporting our blog!