After leaving Bradenton we continued down the ICW to Sarasota.  Erik was extremely disappointed because we just had two AWESOME sailing days in a row and he wanted it to keep going but because the ICW was so narrow and shallow it put a damper on our sailing fun.  We finally made it to Sarasota and anchored close to a bridge.  There was a large marina close by with a dinghy dock so Erik and I took advantage and got to stroll around downtown Sarasota.  We enjoyed the urban anchorage.  The next day we left and sailed down the sarasota bay, but it was a short sail and we were back on the ICW.  Erik was frustrated again with the lack of sailing in tight quarters.  When we finally got to Charolotte Harbor we were able to pull out the sails and had a great run across the harbor on our way to pelican bay. 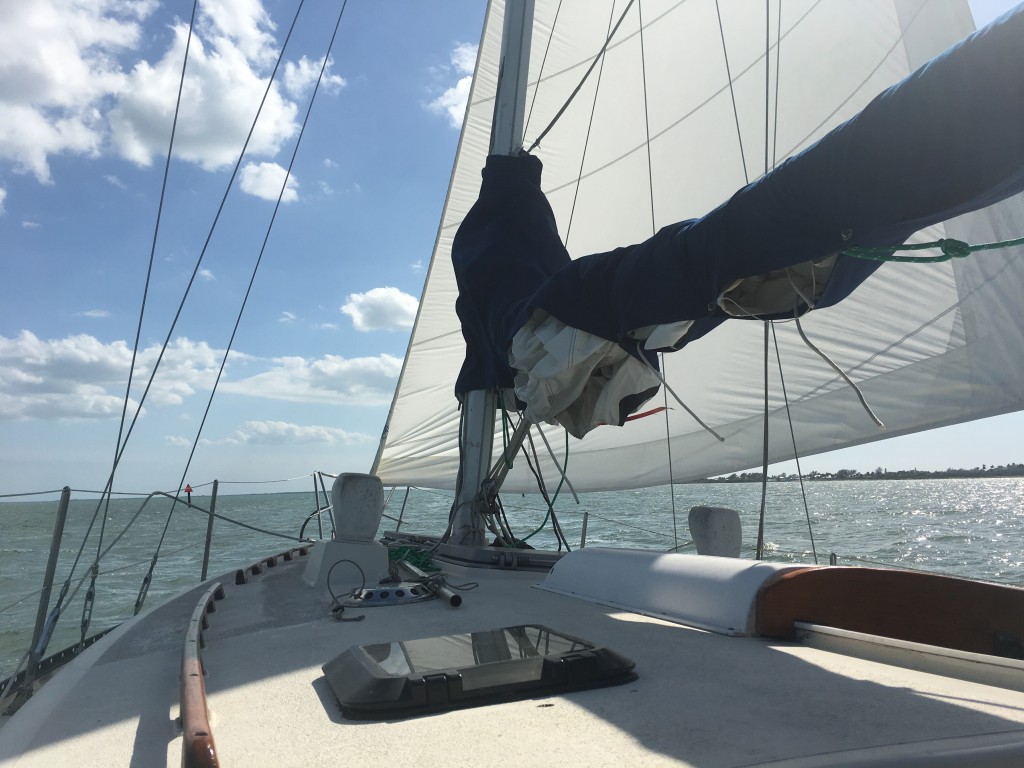 Pelican Bay is an amazing anchorage! It is near Cayo Costa which is an island state park.  Erik and I spent an entire day exploring.  Before we went to the dinghy dock, we explored the mangrove forests in search of the manatee hole.  We got a tip to check it out in the morning and sure enough there were at least a dozen manatees in this hole! It was our first up close encounter with manatees on our trip.  We feel like we may have seen one a time or two but it was never for certain, but here we were surrounding by these awesome creatures! When they come up for air it sounds like an old man blowing his nose! Unfortunately for the photo quality the water was a little muddy and they were stirring it up even more, almost like they were playing in the mud! It was so cool! 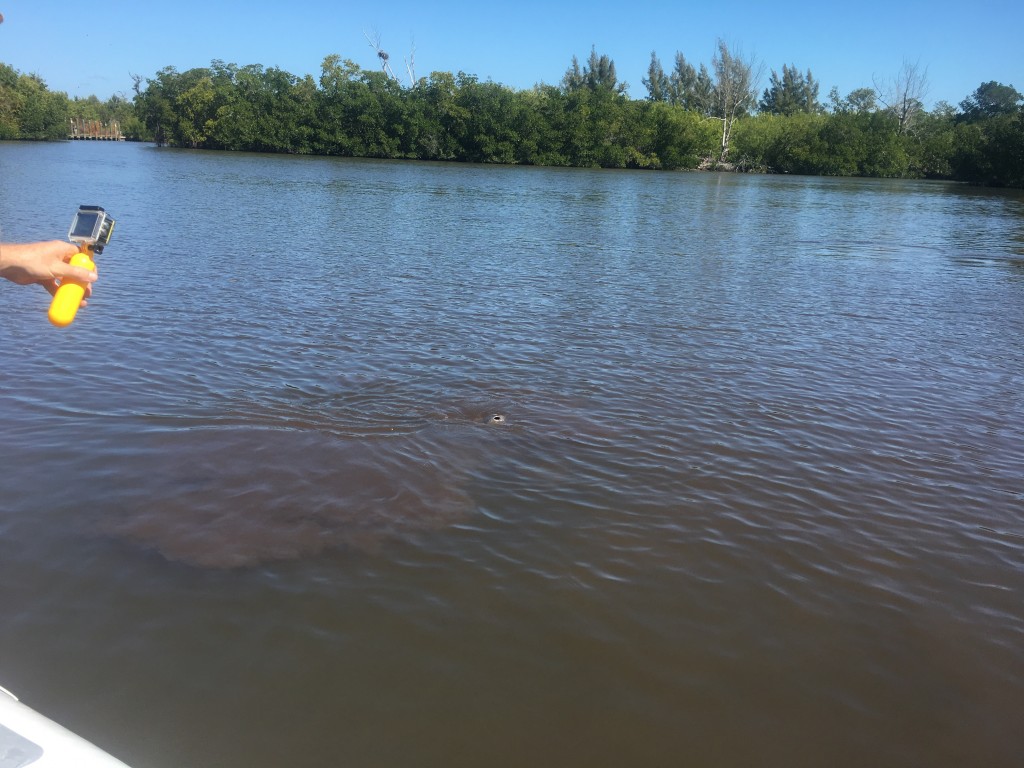 After we got our fill of hanging out with the manatees we went over to ranger station and made sure to pay the $2/person daily fee.  What a deal!  The island is about a mile wide and the park gave shuttles every so often, but we decided to walk.  We really enjoy any walking we get to do after spending days cooped up on a small boat.  Once we made it to the beach side we got to relax and enjoy the calm ocean and peaceful breeze. 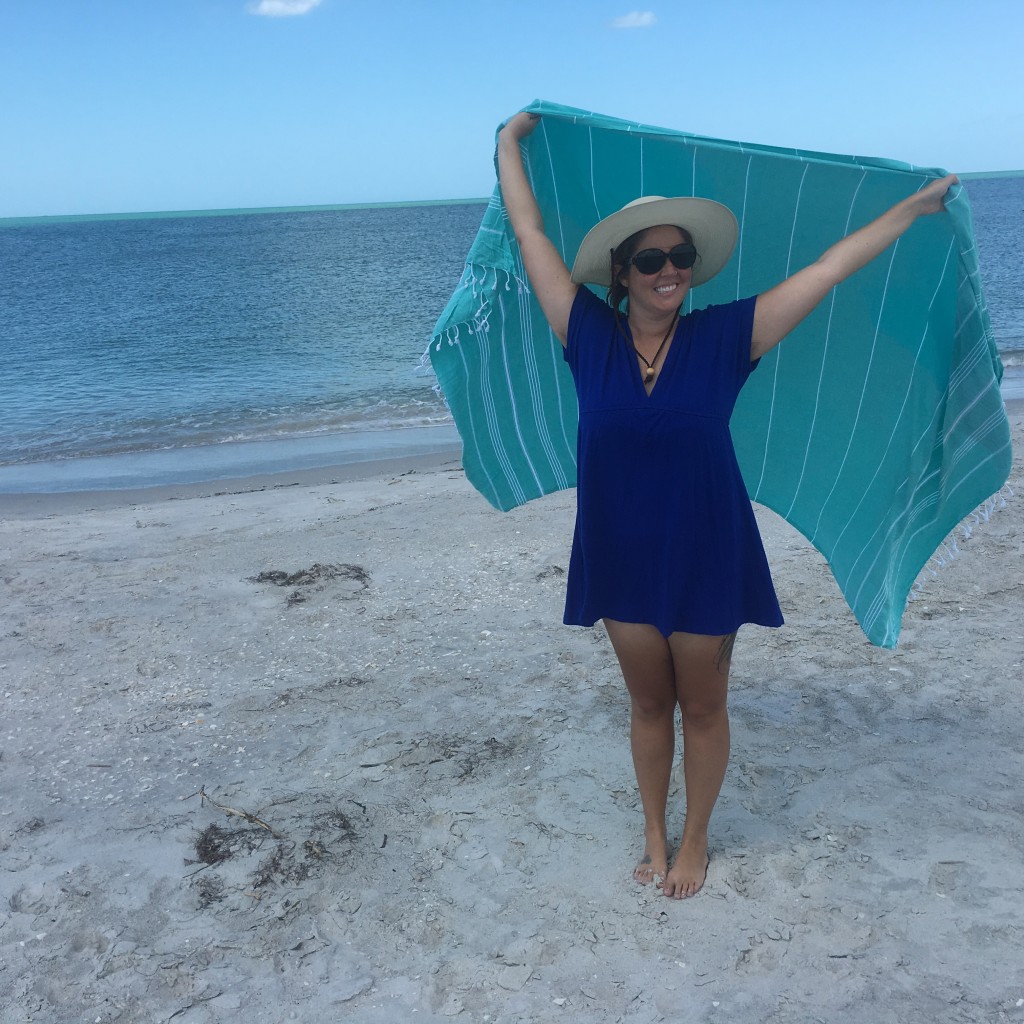 We packed a small picnic lunch and enjoyed it at the picnic tables.  There are cabins you can rent there (very basic cabins) and you can also camp, so I took advantage of the stand up outdoor showers and rinsed off in the fresh water.  We took a different path back to the rangers station and enjoyed the walk.  We even got Klondike bars at the concessions hut, what a treat!  It was a day for celebration after all, it was our 4 year anniversary.  That definitely calls for ice cream. 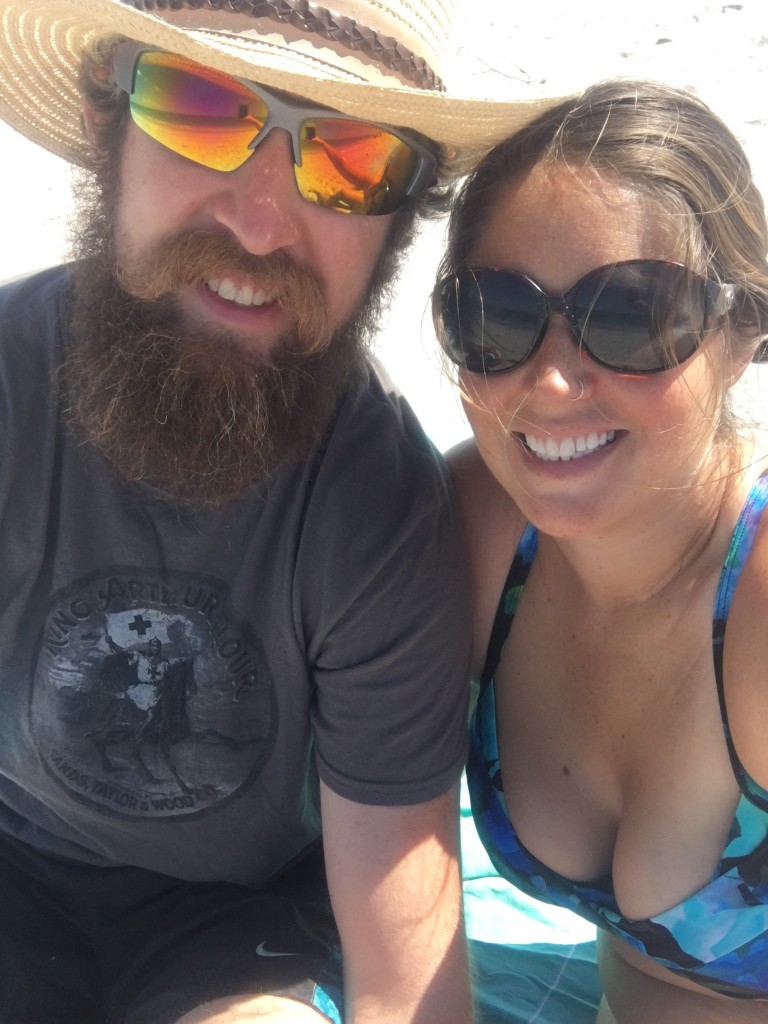 We had a great day at Cayo Costa.  We were enjoying the peaceful anchorage at Pelican Bay so the next day we decided to pull out Erik’s new kite!  He is hoping to get into kiteboarding and he is slowly gathering equipment off eBay.  He got a very small kite as a training kite he can use on land to get the feel for things, so we took it to the other island across from cayo costa and found a sandy spot to test it out.  While he assembled and played with setting up his kite, I walked the beaches where I found the most disturbing thing.  A deceased sea turtle!  It was pretty big and it had to be fresh, like less than 12hrs because it did not smell at all and it’s eyeballs were still in tact.  It made me very sad and the scientist in me immediately wanted to do a dissection to see how much plastic the little guy had in his belly.  But I guess even sea turtles have to go to sea turtle heaven eventually. 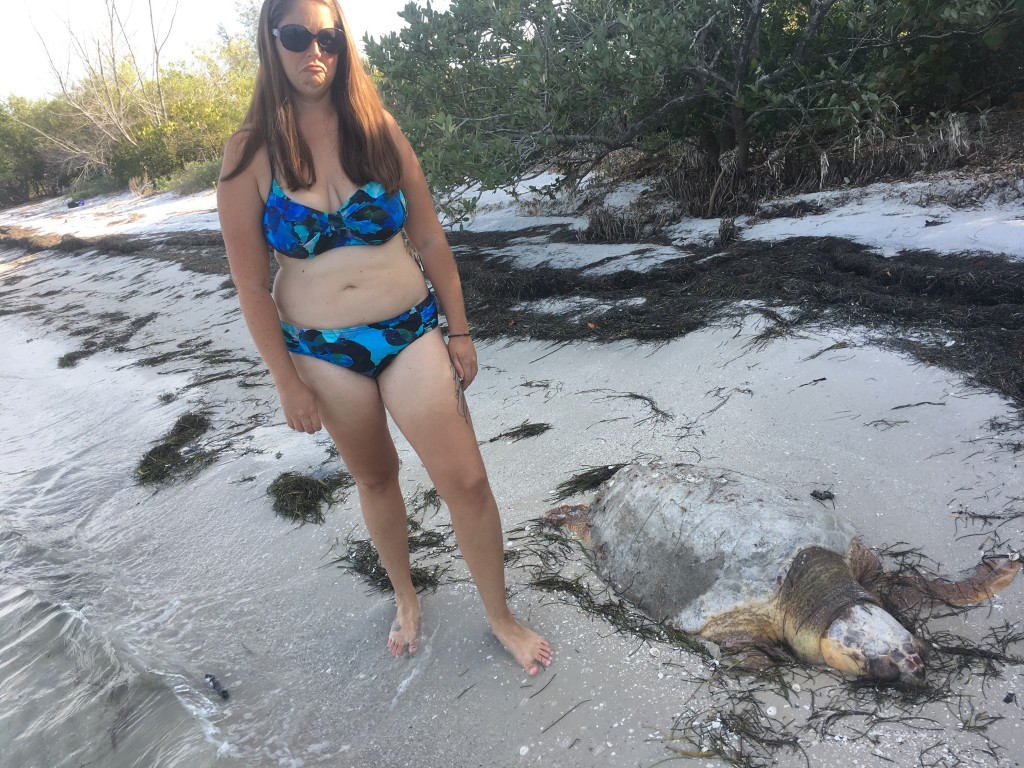 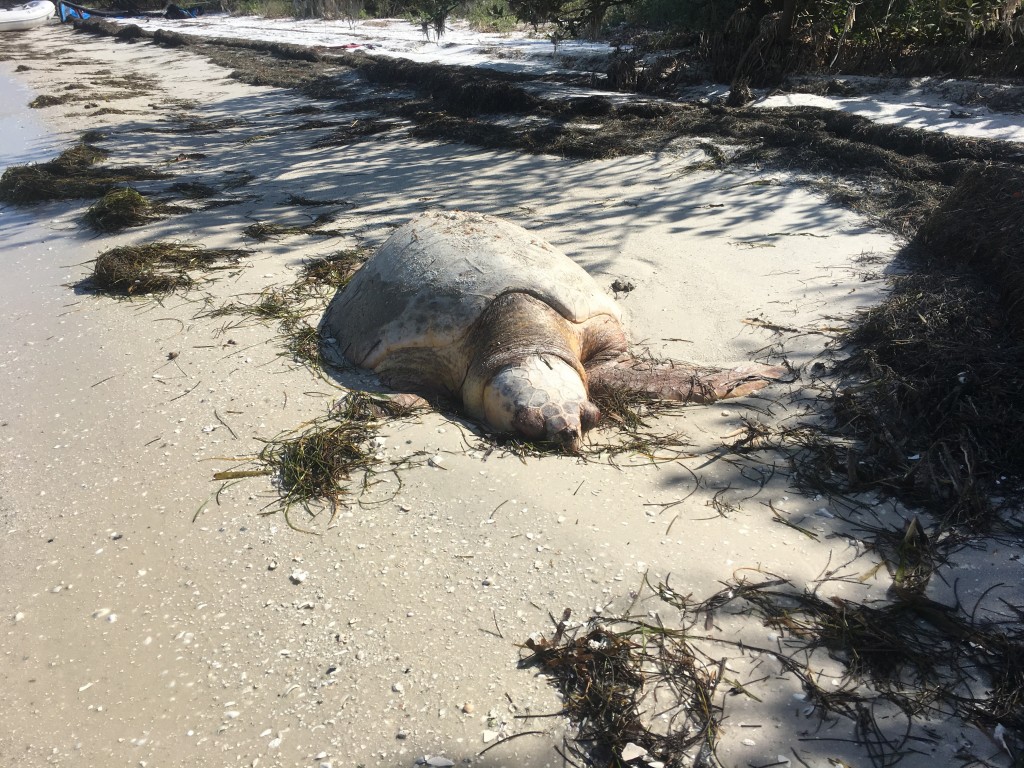 We had a good time the rest of the day attempting to fly the kite but the winds were too low for any real success. We walked up and down the beach after playing with the kite.  It was a peaceful day. 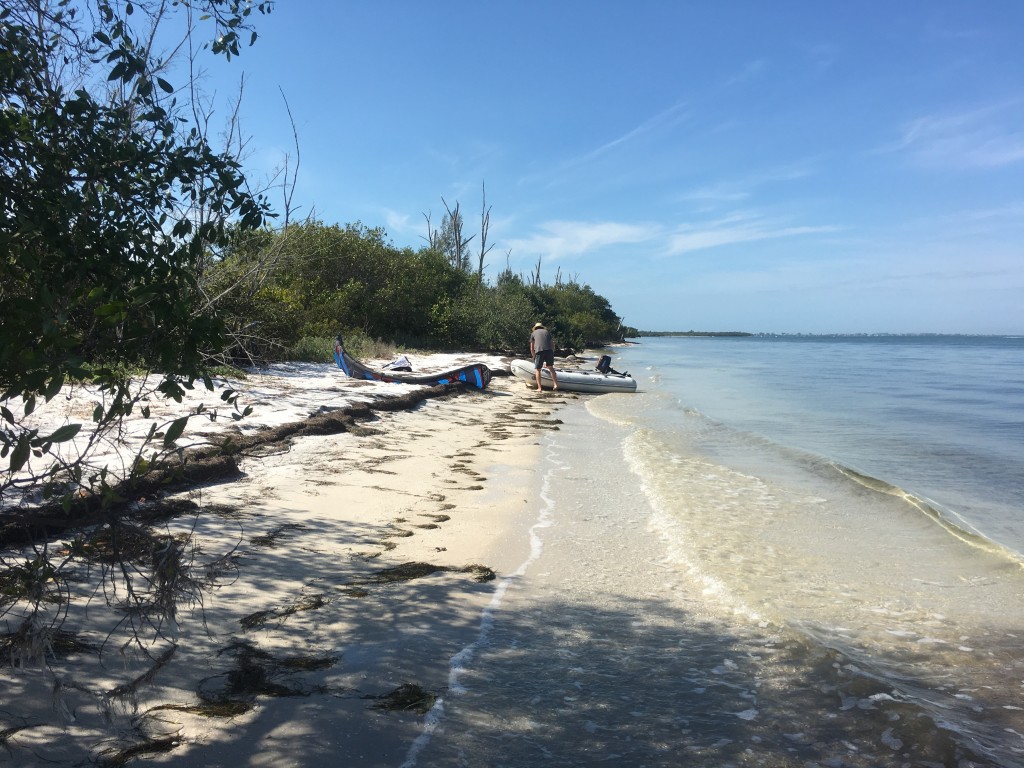 Also while I was walking on the beach I found a couple of coconuts.  I decided to see what this island life was all about and gave Erik the task of opening them.  I was almost certain it would be rancid but to our delight it was perfectly fresh! Erik was able to remove the husk then break open the shell.  He poured the coconut water in a glass and it was such a tasty treat! We then scraped the shell for tasty fresh coconut flesh.  I LOVE coconut so I was in heaven. 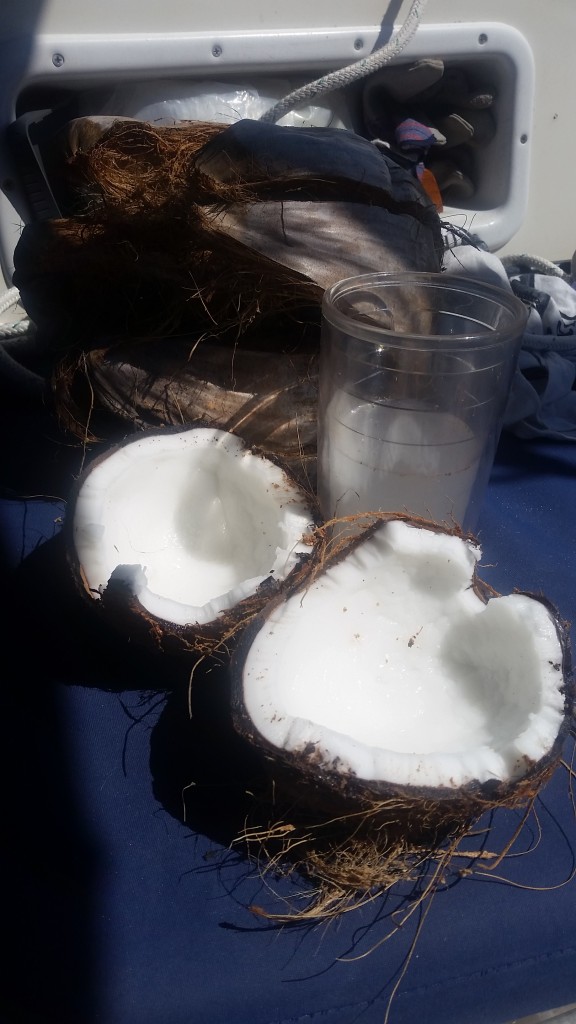 After enjoying Pelican Bay at Cayo Costa we were unsure of our next destination, but we knew the general direction we would head was SOUTH! 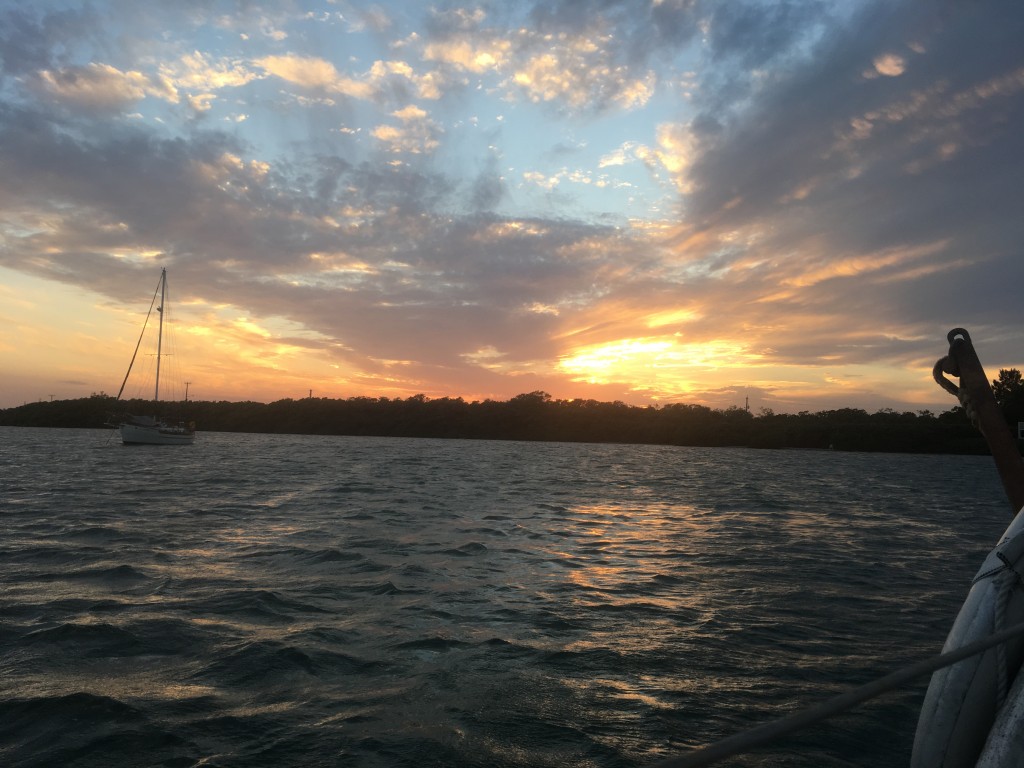