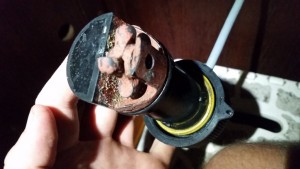 Knowing your depth is a critical aspect of traveling on a sailboat! Here we’ll review how the Airmar DST800 transducer has performed for us so far and share some of our thoughts and experiences with it.

When you put a hole in the bottom of your boat, you want to be sure its worthwhile! Our boat originally had 2 separate sensors, each with their own thru-hull. The Airmar DST800 triducer allowed us to combine our speed and depth sensors into one thru-hull. We were then able to fiberglass over one of the old holes. Its always nice to have one less place for water to find its way into your boat.

The Airmar DST800 smart sensor comes with a thru-hull that the sensor screws into from the inside. It also comes with a blank plug so you can remove the sensor so that it won’t get fouled during storage. The thru-hull has a flap that blocks most of the water when you remove the sensor, so swapping between the blank and the sensor is less messy than it would be otherwise. Heres some video footage of us swapping the sensor and the plug. If you let it sit for a while, it can take quite a bit of force to remove it!

The most important function of the transducer, the depth reading, is luckily the most reliable. Even when coated in a respectable layer of slime and barnacles, the depth sounder seems to remain functional and accurate. The transducer surface has also proven to be very resilient and has held up to 3 years of cleaning (including scraping off a few barnacles) without any significant damage.

We’re using a B&G triton T41 display with ours, and it allows us to offset the depth that the sounder sits below the water line, so that we can display true depth.

The marketing materials claim readings up to 330 feet, and that seems to be accurate in our experience. Once you go beyond that depth, it’ll display 3 dashed lines. We do sometimes get phantom readings of 40 feet or so while in thousand foot depths, and I’m not sure if thats a sensor anomaly, a thermocline, or a giant squid sizing us up!

The speed-through-water sensor is a bit more troublesome than the depth sounder. The paddlewheel can easily become obstructed. I have never noticed it becoming fouled with seaweed or any floating debris though. To be honest, if its not working, its likely because I haven’t cleaned it in a while. Its pretty easy to remove the sensor from the inside of the boat and clean if needed, but often the area of the hull directly around the sensor has growth that needs to be removed for it to function properly. Sometimes you’ll find strange creatures living in the wheel cavity. Once I found a baby catfish!

Its nice to have a speed-through-water sensor to complement any GPS devices on board. Subtract your speed-through-water from your speed-over-ground and you can (assuming the paddlewheel is clean) deduce the speed of water currents affecting your headway. Since our engine RPM gauge is sticky, I often use the speed through water to gauge how much throttle to give the engine.

Our temperature gauge has always displayed random amounts that don’t reflect reality. I don’t have any real use for knowing the exact sea temperature, so this hasn’t bothered me too much. It seems that this might be a design flaw for this unit, as there are MANY reports of the temperature readings not working correctly. So if you actually need to reliably know sea temperatures, this is probably not the unit for you.

It seems like temperature would be the easiest to implement, so the fact that its done so poorly on the DST800 seems odd, but it is what it is! 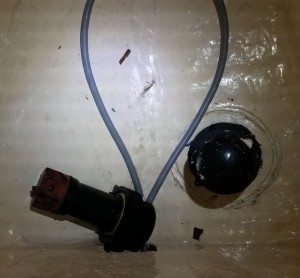 The Airmar DST800 comes in several flavors. Its available as a NMEA 2000 sensor as well as a NMEA 0183 sensor. Further complicating matters, the NMEA 2000 model is subdivided. You can choose a Garmin DST800, a Raymarine DST800, or a Simrad DST800. The sensors are all identical. The only difference is that the wire coming off the transducer has a different connector for each model, designed to fit the respective networks. If you have a standard NMEA 2000 network, the Garmin is the appropriate pick.

Click below to reviews and check Airmar DST800 prices on amazon!