You know the saying:  One step forward, two steps back.  Well that’s definitely how the story has been going lately.  But I am a positive thinker and the main thing to keep in mind is that WE ARE MAKING PROGRESS!  And at the end of the day, it’s great to sit on OUR boat and take it all in (and watch the sunset).  So now I get to tell you about all the steps we are taking, and the two steps back Ragnarok kicks us back. 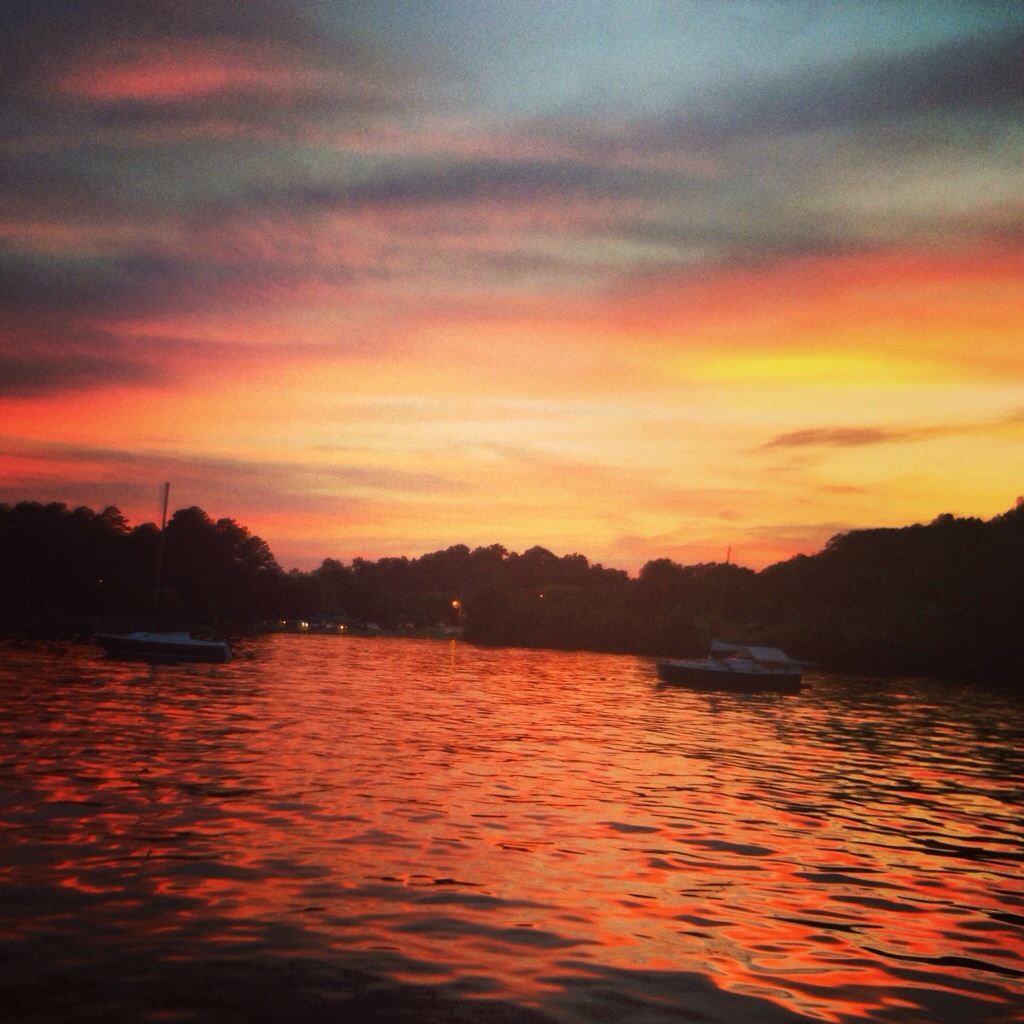 Mast re-wiring task…. The goal is to replace all the wires and light fixtures in the mast.  Reasoning: the old wires are corroded, both the fixtures were old and broken, and lights are extremely important to communicate with other boats, especially at night.  There are two lights on the mast, one at the halfway point (at the spreaders, where Erik is hanging out at in the picture below) and one at the top.  The plan was that since the old wires were running down the mast already to connect to the old to the new (we used electrical tape) and just to thread it down the mast.  This worked incredibly well on the first attempt: the light at the spreaders.  Now there is a conduit running down the mast too (imagine a long tube to keep the wires contained so they don’t get tangled with ropes and also to keep from clanging around in the mast) so it was important to get the new wires in.  So Erik climbed halfway up, taped up the wires, and I tugged at the bottom of the mast, and viola! Worked like a charm! We were so pleased and eager to get the top knocked out too!  So the next day Erik scaled the mast again, this time with over 50ft of electrical wire hooked to him (last attempt at the spreaders I was able to hoist it to him via pulley, but alas no pulley at the top).  So he gets up there, tapes it up, I give it a tug, and nothing happens.  Great.  So the only person who knows whats really going on at the top of the mast is Erik, but I will try to describe what he told me… At the top of the mast, there is a cover.  This cover keeps ropes in pulleys and rollers, but also blocks any access to the electrical wires.  There is also a VHF wire up there.  From what I figure, the electrical wires had to be threaded down a narrow opening, the go back up to enter into the conduit, and so when I tugged one more time after a revision and felt the wires give, I was so joyous that it had made the impossible transition.  Well I was wrong, the connection between old and new had come loose, leaving me pulling out the old wire with no way to get the new wire down.  As Erik put it when he got down: soul crushing.  We have since came up with plan B, C, and D.  Plan B is to remove the mast head cap to thread the wires down with an easier access… again easier said than done.  Whoever put it up there definitely did not use stainless steel and the bolts are so corroded they are difficult to remove.  Erik has been up there twice with Kroil (Kreeping Oil, that has worked thus far on every stubborn stuck screw) with no avail.  We’ll keep on working on it… let ya know what we end up doing.  Cant wait to light our boat up like a christmas tree and sail it all night.

Erik successfully removed the mast cap after three trips up with kroil and a hammer drill.  We tried running one of those “snakes” (a metal wire used for electrical work, pulling wires, what we were doing), never made it from the bottom.  Never made it from the top. Long story short, we are extremely frustrated.  But the reality is that there’s more work we need to do up there, Erik was talking about replacing the rigging, and that will be sooooooo easy if we take the mast down.  Plus we can get new conduits, fix the problems at the top so we won’t have so much trouble doing this the next time, and place all the things like wind-vanes, lights, and fancy shiny things up at the top in a pretty little design. 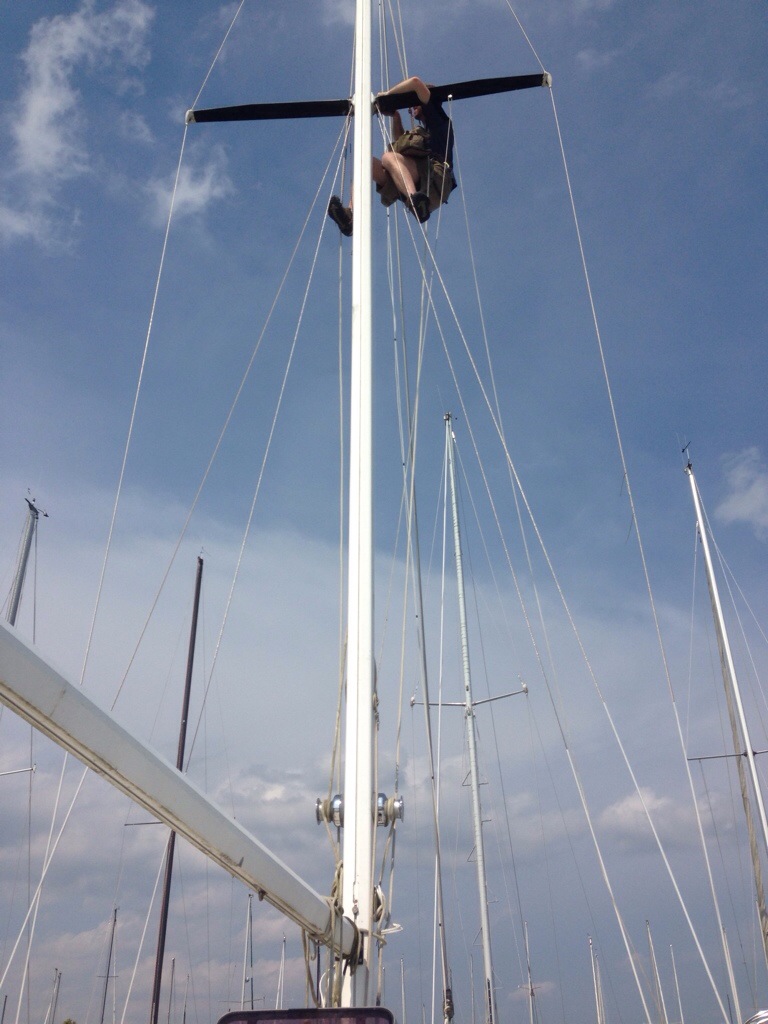 It’s interesting how on the sailboat a simple task like changing the light bulb becomes an all weekend ordeal… We had the “new” fixture to wire to the front of the boat that the previous owner had left us.  Erik decided to tackle this “simple” task but when he got to the front of the boat, realized that the fixture was not the best fit, ended up having to drill out stainless steel (very difficult) to fit the fixture, then when we placed it on and flipped the switch, nothing.  Great! Now I got to find where the heck those wires disappeared into the pulpit (the metal rods at the front of the boat, where rose hung off in the titanic) 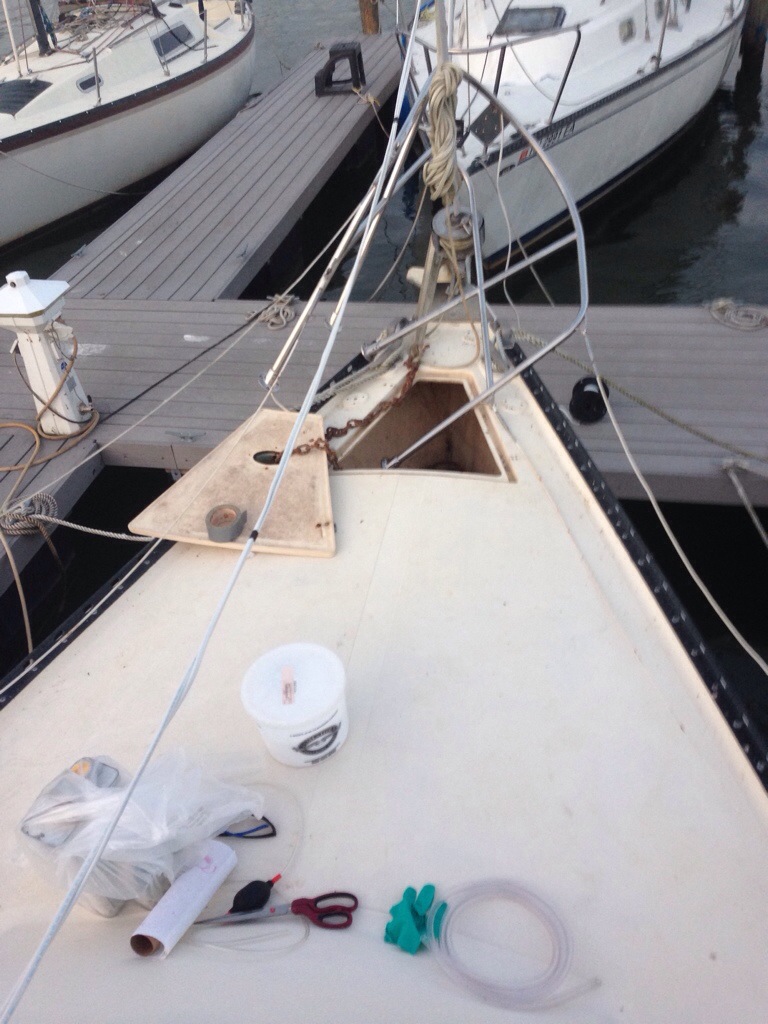 I found the connection under the anchor locker, but when i went to inspect it the old connections literally fell apart in my hands! SO now we decide we’ve got to rewire this as well.  Off comes the pulpit, Erik unscrewed all the plates and screws and realized heck since he had it off to go ahead and re-bed these screws too.  So off I ran to get the epoxy! We finally got new wire, re bedded the pulpit, and the light works now! 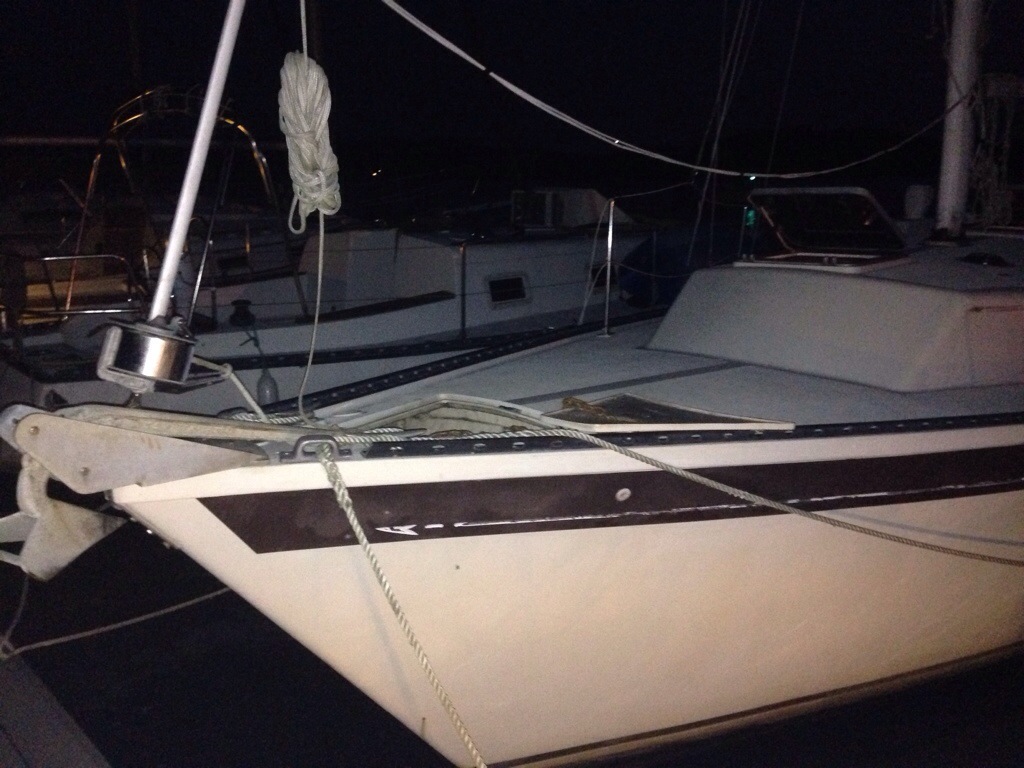 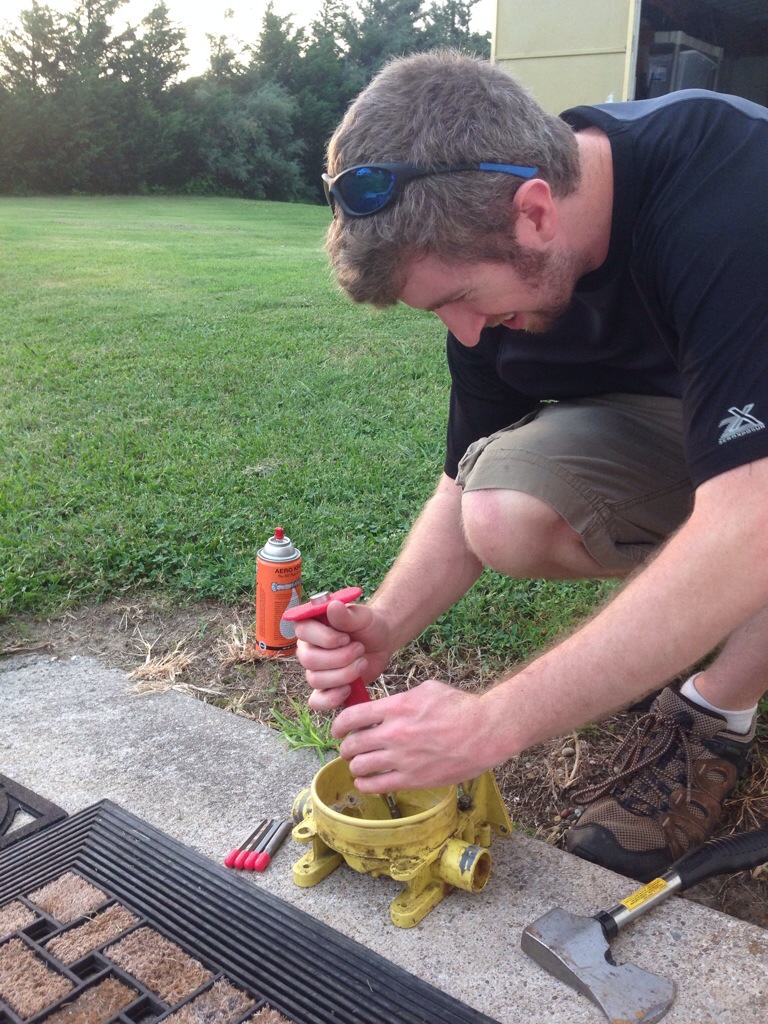 Another thing Erik has been working on is all of our pumps! We took home 3 in total: a pressure pump for under the sink which runs pressure to our faucets (sink, shower), a pressure pump in the engine room that is our secondary bilge pump and our shower bilge pump, and the manual bilge pump (the yellow pump in the pic above).  He spent time with all of these guys and patched them up best he could.  Good news: both pressure water pumps work! Bad news: we have to find a new way to mount the pressure pump under the sink because the old mount was so corroded we destroyed it trying to get it out.   Other bad news: the manual bilge pump doesn’t work.  So still working on this… more later. 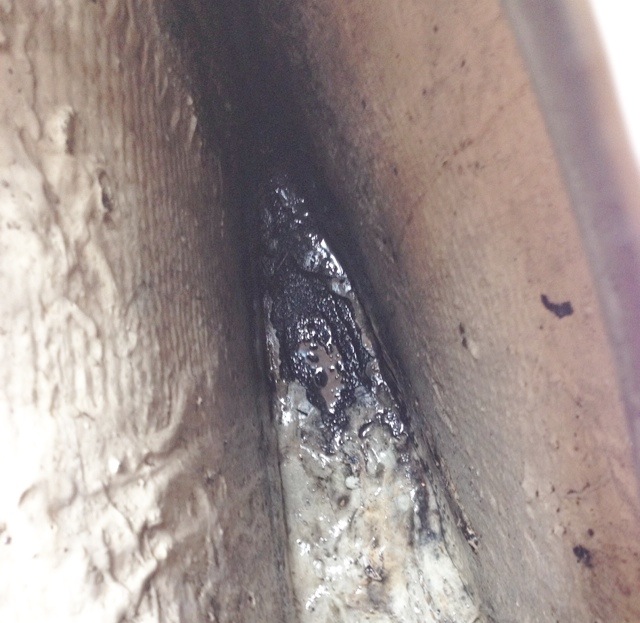 Since we got our secondary bilge pump running and mounted, we wanted to check it out.  This pump is different from our other pump in that it can suck every drop of water out, where the other is just a sump pump.  So that’s what we did, sucked it dry wiped it down, and we find this.  Not sure what’s going on here… Erik’s guess (which is really probable) is that this is concrete from under our keel.  It’s just bizarre to me though, like the shape: it’s not a gash, or a cut, or a crack… No clue.  We have much more research to do here (Erik is on his way home with a sample for us to analyze).

Watching the supermoon from the docks. 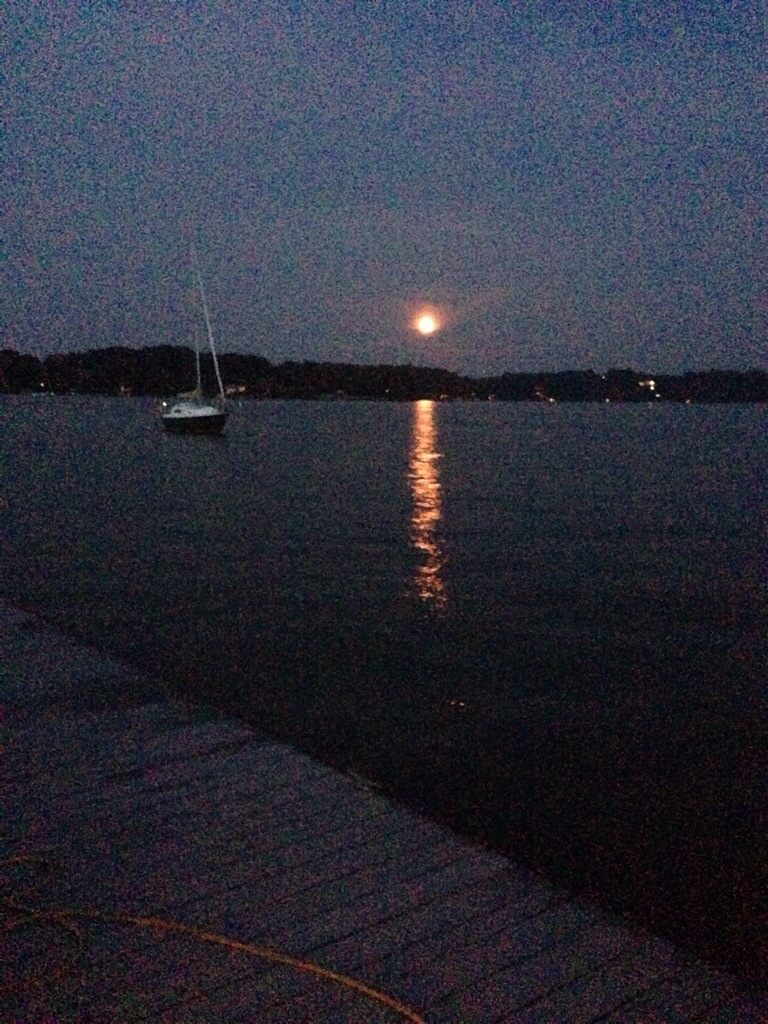 Erik has purchased and received his radio! This is all forward progress, as the radio looks great and we tested it and it works.  He can probably tell you a lot more about it, because honestly it’s way over my head.  Time for me to start working on my HAM radio license. 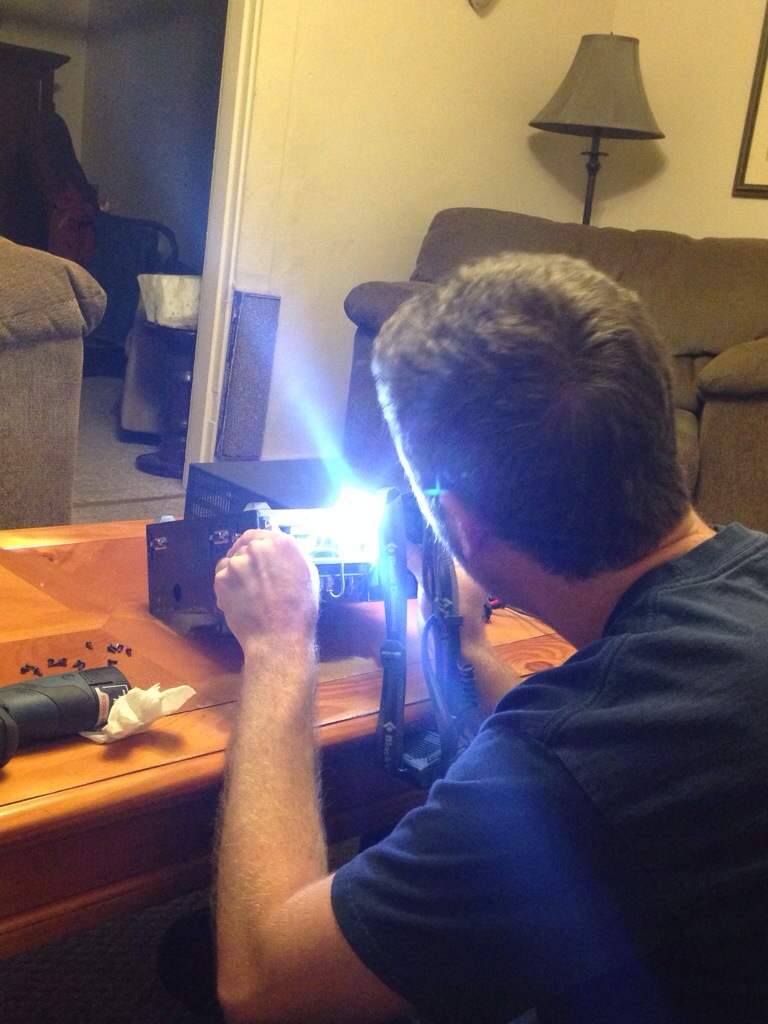 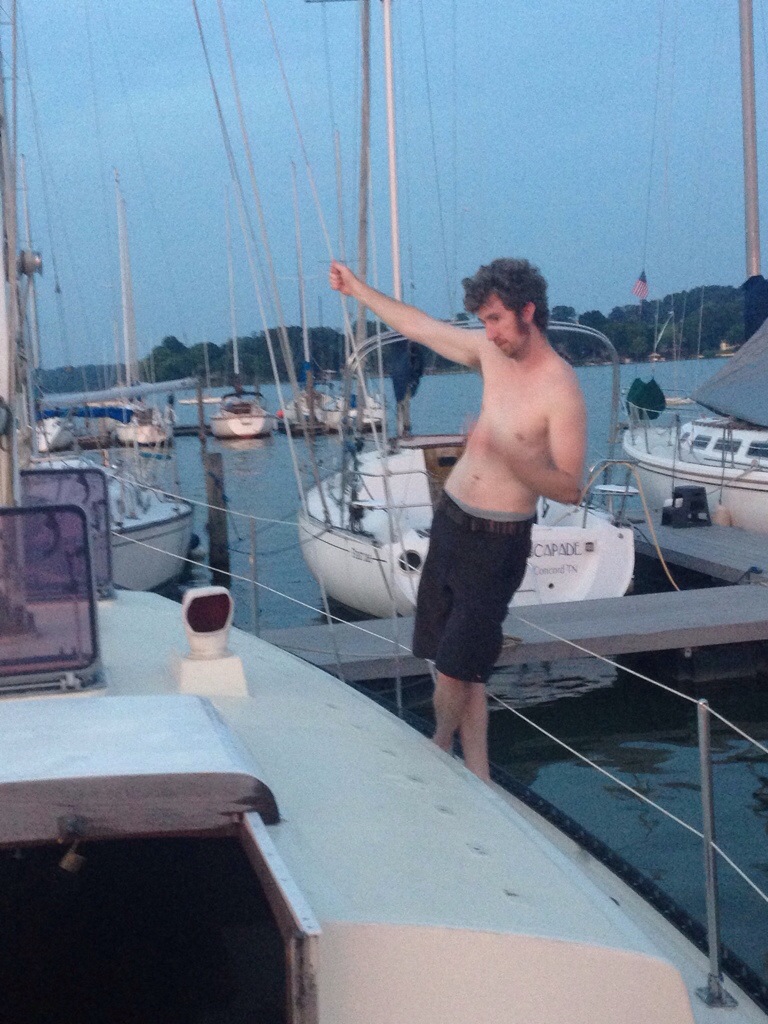 OMG WAIT! I’m about to leave for FLORIDA to go visit my grandma! I can’t be telling anymore stories! I’ve gotta go pack. Until next time guys! 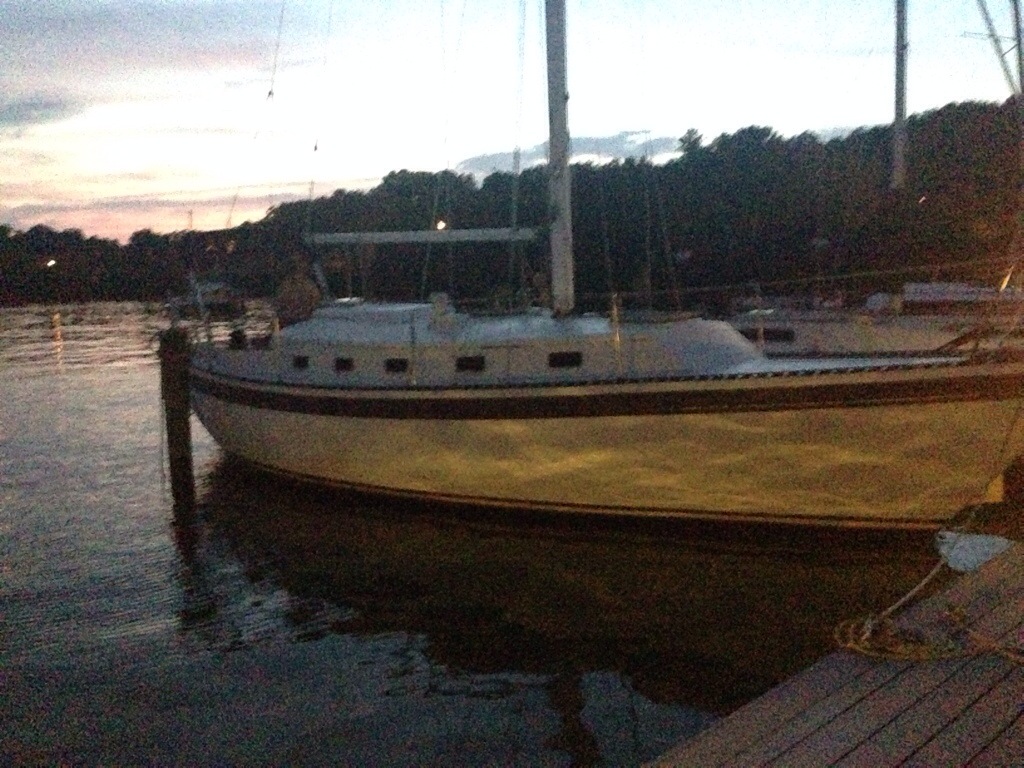