After we narrowly escaped Pensacola, we sailed right through Destin and onto Panama City where we had plans to meet up with my Dad!  He was getting into town Wednesday evening, and that was what time we arrived as well! We had hoped to be there and ready to meet up with him but of course it took us an extra 4 hours than we initially calculated.  We are bad at math! But also the wind was dying so we weren’t going full throttle on our sail there.  We used active captain and google maps to check out an anchorage near St. Andrews State Park, as Dad’s condo was very close to there.  We found one that would probably work, but when we arrived at dusk we found it to be much more crowded than anticipated.  Without much room to maneuver we set our anchor the best we could and set a conservative anchor alarm.  As the sun set and we sat in the cockpit we noticed that none of the boats had anchor lights and that there was a boat washed up on shore… Great an anchorage full of derelicts.  Later we noticed someone motor up to one of the boats.  Then we saw him motor to the boat next to it, then back to original boat?  We assumed he had came upon these boats for a deal too good to pass up and was basically storing them for free in the anchorage.  It appeared there may have been one other boat with someone on board, but the rest (10-15 boats) were abandoned.  But our anchor was set so we rested. 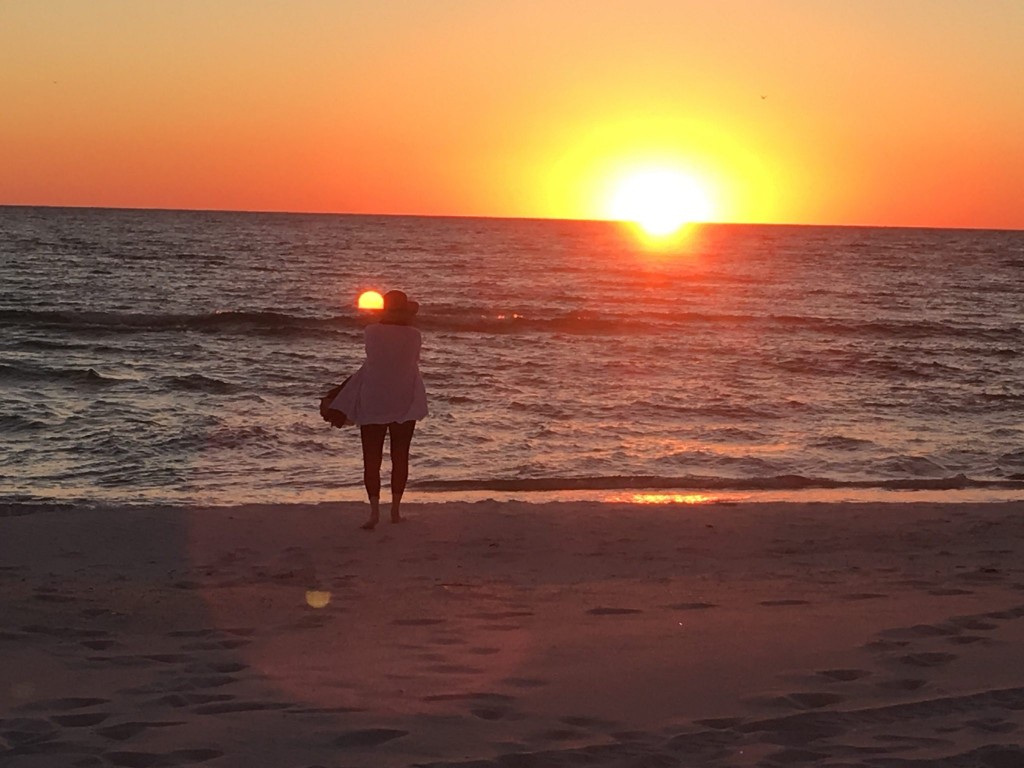 Thursday we met up with Dad and had fun hanging out, doing laundry, eating junk food, and walking the beach.  Erik and I were a little paranoid about the boat, since the anchor alarm he had set sent me a notification that we were outside the perimeter.  So we ended up walking all the way up the beach, into St. Andrews State Park, across to the other side, and found our boat.  It was still where it was.  The conservative alarm, a shifty wind, and gps inaccuracy are potential factors in why it notified us.  After walking back to the condo Dad made us a deal where we would stay with them and move the boat to a marina, which would enable us to easily hang out on it later.  So we went back to the boat, and moved it to the nearest marina, which was also the cheapest plus they had a discount for BoatUS members.  We stayed two nights for a cost of $80 which Dad gifted to us, thanks Dad! 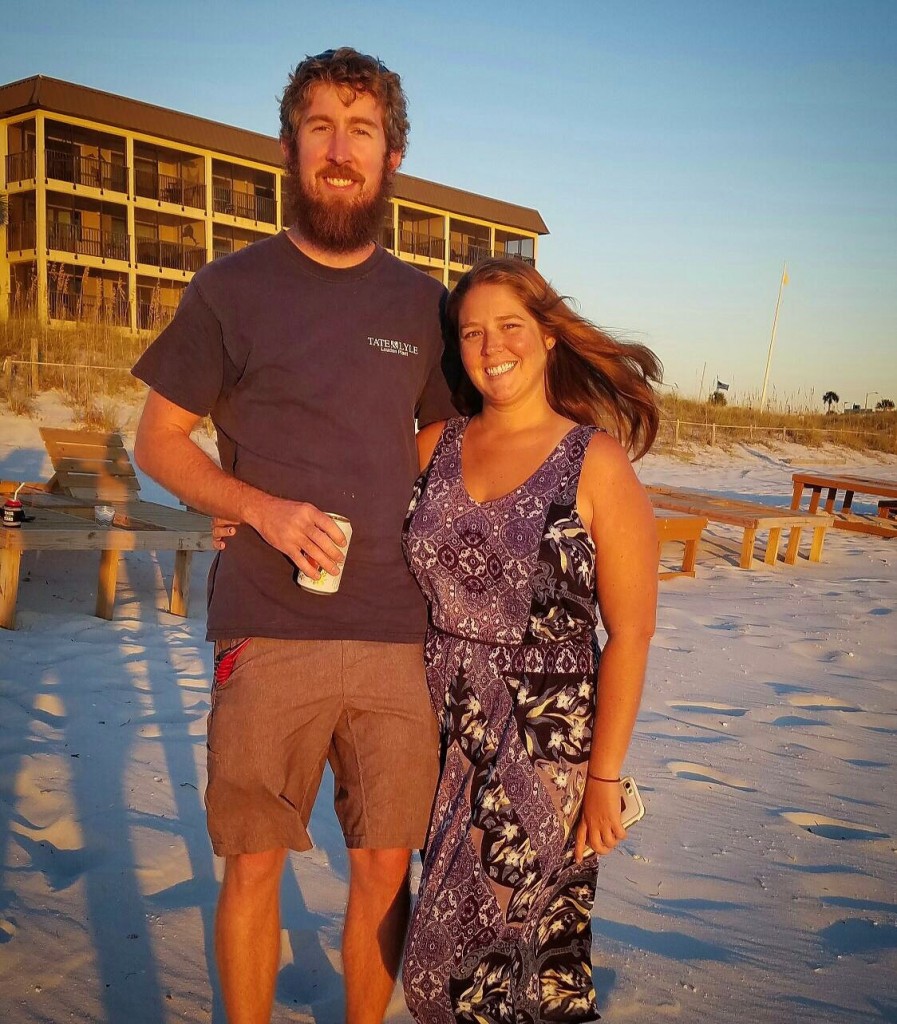 sunset on the beach with my honey! love this photo! 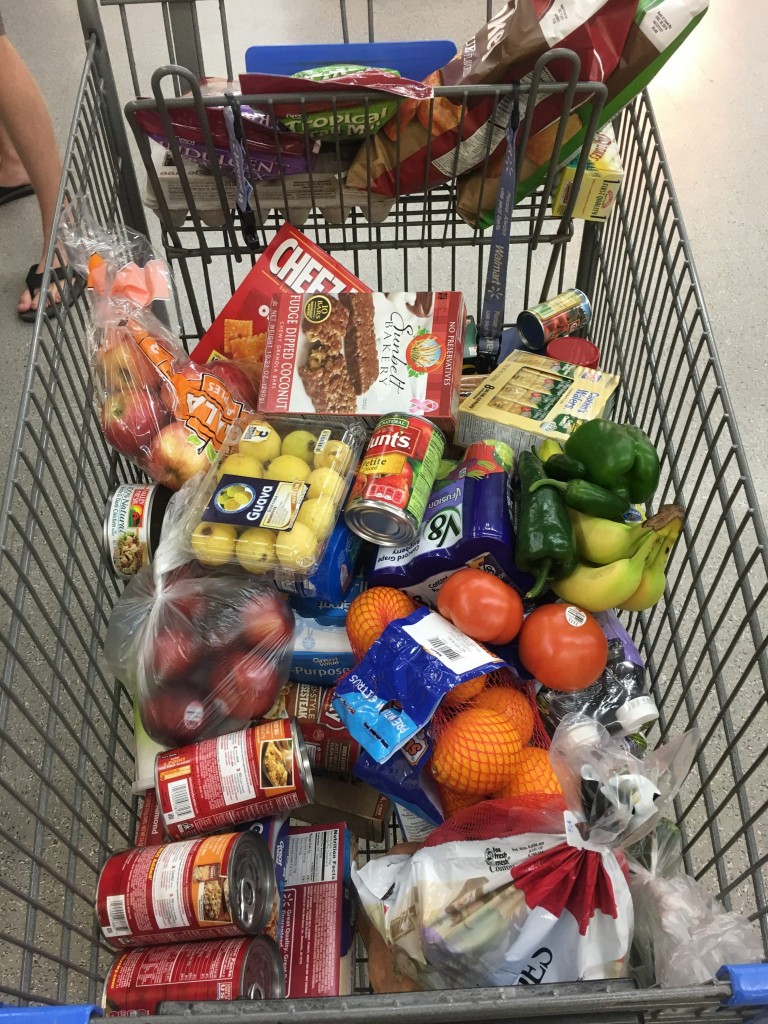 Friday Erik and I took full advantage of Dad’s rental car and ran a TON of errands.  We provisioned at walmart.  Usually when we shop on foot we just pick up fresh fruit and veggies, so we got more things like snack bars and canned goods.  We got spare keys made (after realizing we only had one key to the engine).  We dropped off our newly acquired scuba tanks to get visually inspected and filled.  We also left our buoyancy compensators to get serviced.  We were gone the entire afternoon and wore ourselves out! It’s exhausting getting all of the months errands taken care of in one day!  After all the running around we all got to hang out on Ragnarok for the evening and passed around a cheese tray! It was delicious and so great getting to show Dad and Stephanie just a tiny glimpse of what living on a boat is like. 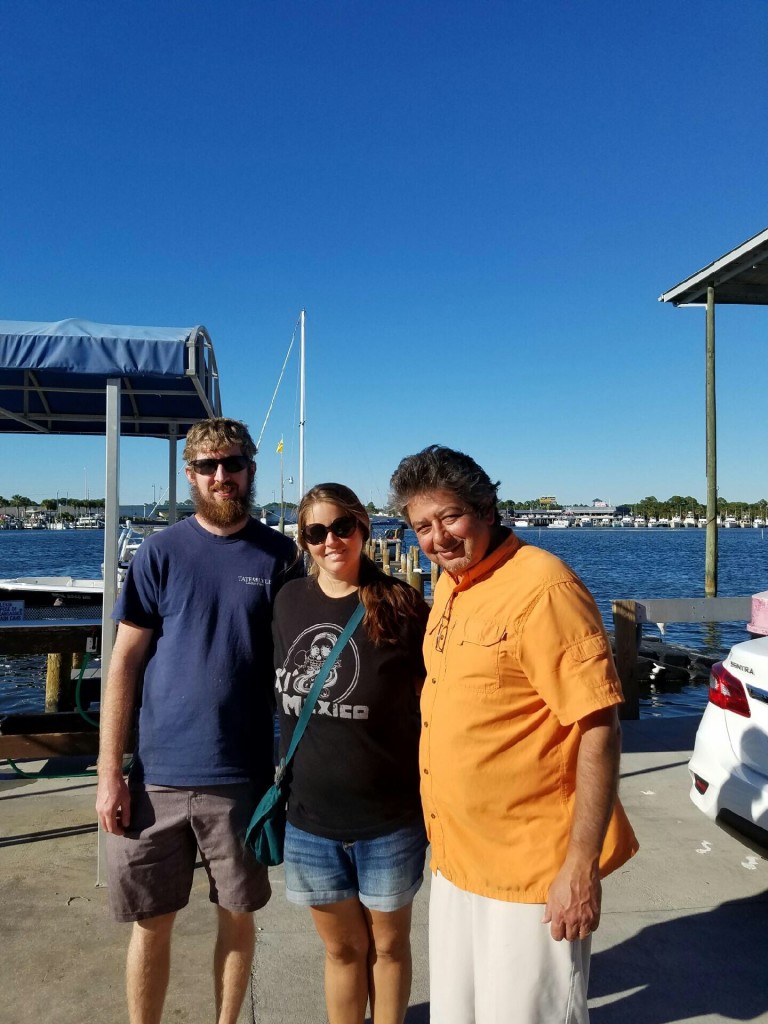 Saturday late afternoon was when Dad and Steph had to leave, so we just spent the day lounging around walking on the beach enjoying the day.  It was so great getting to see them in Panama City Beach! It was a short trip and it flew by, but I am so thankful to have such supportive parents who are so happy to see me pursuing this crazy adventure.  After we were dropped off at the boat, Erik and I had to head out of the marina and to the next anchorage.  No way were we going back to the one we were at previously! We scoped out a beautiful spot on the bay side of Shell Island State Park, which was fabulous!!! The next day we walked over to the gulf side for our own private beach with crystal clear water. It was gorgeous. 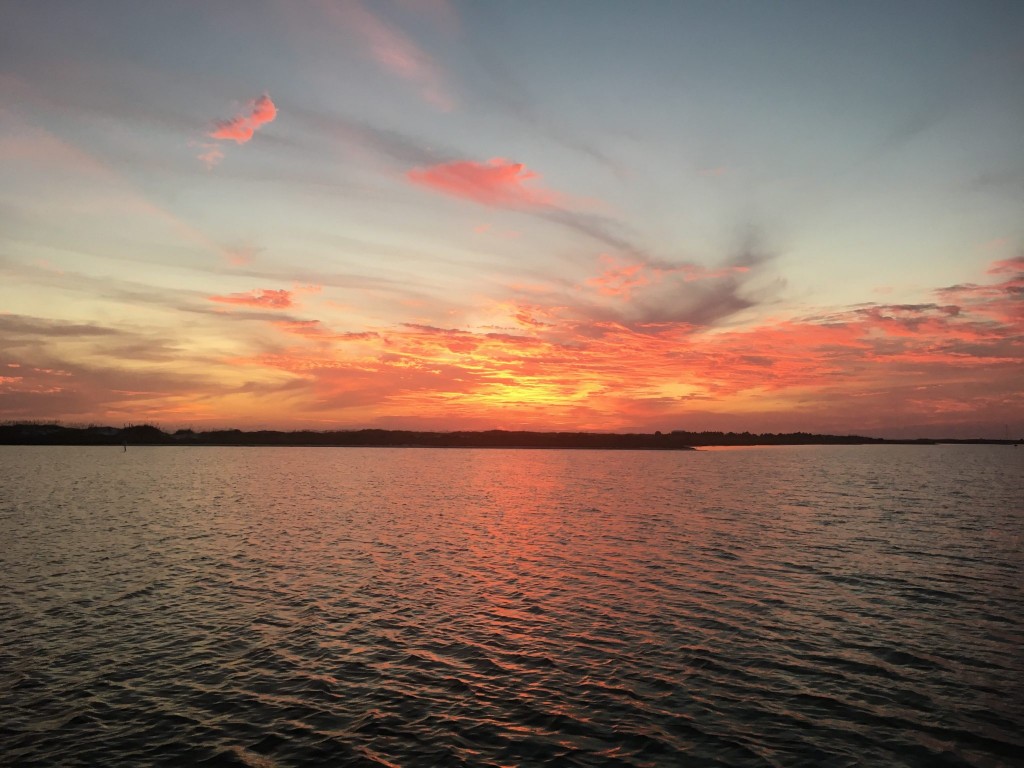 The scuba shop we found was able to get us all our gear back the next day when we dropped if off on Friday, so with a complete and safe set of gear it was time to put it to use!  For our first scuba adventure we loaded up the dinghy and took it to shore, then walked into the bay as we familiarized ourselves with our new to us gear for the first time.  We planned on cleaning the bottom of the boat but as we got to deeper water we realized we didn’t have enough weight and were not sinking.  So we scuba snorkeled.  It was fun, and to be honest I’m glad my first trip back in the water in two years was easy and short.  The next day Erik was determined to clean the boat, so he scrounged up all the spare metal he could find when I suggested he use our old spare anchor chain.  We both thought about how potentially idiotic and dangerous this could be, but he wrapped it around a carabiner then clipped it on his chest clip.  If something was to go wrong, he would simply unclip it to release it and if that didn’t work he would use his scuba knife to cut it free and if that didn’t work he would drop his gear.  So with all the weight in my BC and the anchor chain on Erik, we dove right off the boat this time using our giant stride.  We were able to sink and scrub the boat bottom.  It was good fun! 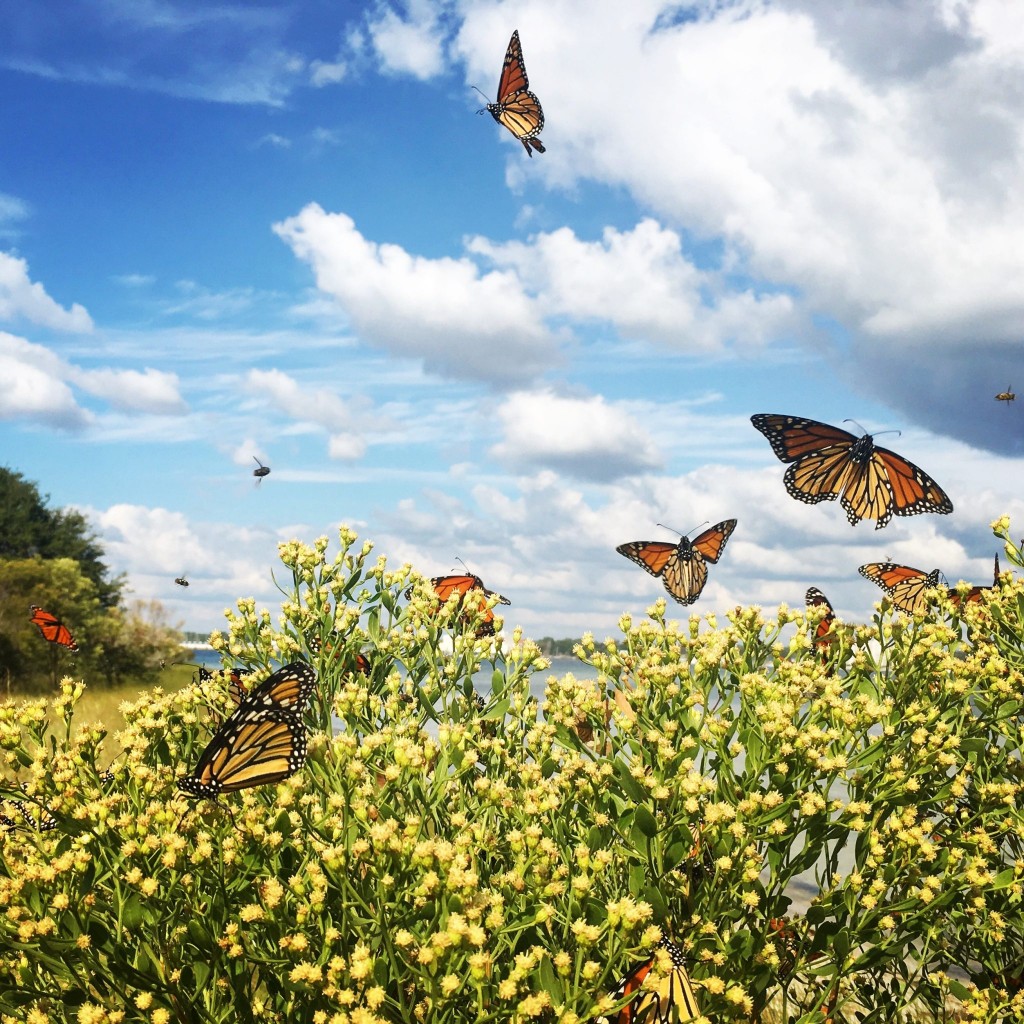 After we had our fill of scuba adventures, scenic nature, and peace and quiet at Shell Island we decided it was time to find an anchorage that had better wifi.  We found a spot right across from the Panama City Municipal Marina, and while it was just off the ICW and was quite rocky from passing boats, it was well protected from the wind we were dealing with.  We stayed in this spot for a week or two, and enjoyed ourselves and took a nature walk where we found an amazing bush covered in butterflies!  We got to meet up with Erik’s uncle Larry and aunt Karen.  They treated us to a delicious lunch that was such a treat and we talked about the boat.  Larry had lots of great questions and mentioned he was thinking a lot about the lifestyle, Larry and Karen: you guys are more than welcome for a crash course visit whenever you want! They are awesome people with adventurous spirits as we talked about experiences with flying planes, diving, and fishing. 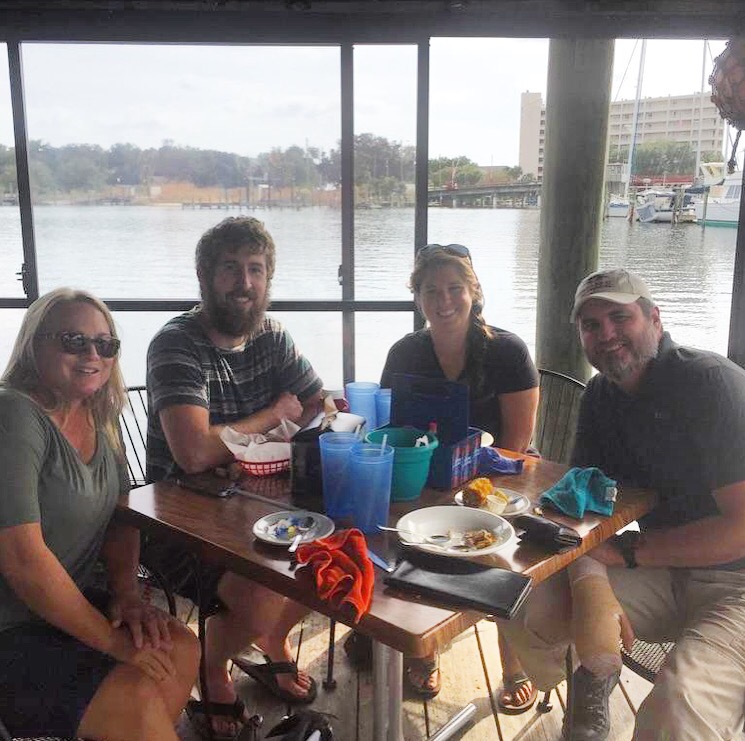 Once the winds were predicted to shift and I was fed up with the boat traffic rocking us, we found a new spot in a quiet bayou.  We stopped by the municipal marina on the way there where they had free pump outs (they usually cost $5) and we filled up on water.  We were off to Watson Bayou! We found a good spot to drop anchor.  In another section of the bayou it reminded me of the derelict anchorage we were at earlier.  There were two sunken sailboats and two sailboats had “for sale” with the same number listed (someone storing more than one boat out there). There was at least one or two other liveaboards over there.  But we were in our own space with lots of room so it wasn’t as dicey.  There was also very good wifi in this anchorage and we worked on the blog and did a few boat projects. 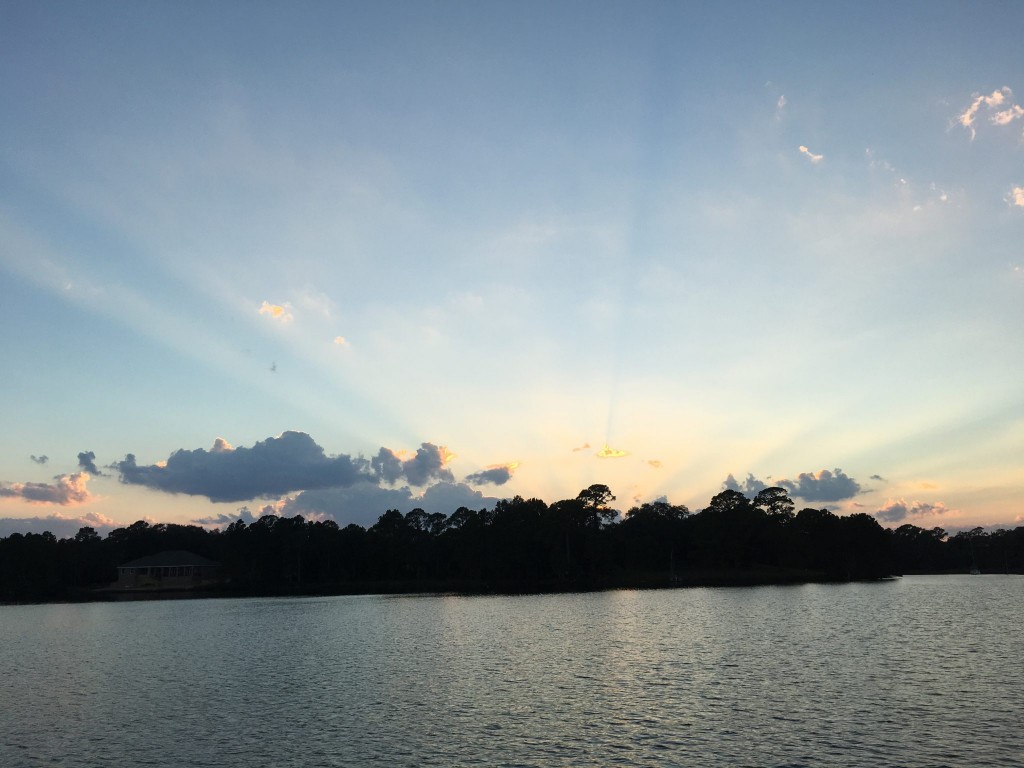 Every time we are in a new anchorage I love to use google maps to see if there are any grocery stores or neat shops around and I also use trip advisor to make sure we aren’t missing out on any must see spots.  We lucked out at Watson Bayou because there is a delicious oyster bar just a few blocks away.  It was called Gene’s Oyster Bar and it was such a great experience!  After a couple of bad experiences with oysters, Erik has sworn them off, but I remain unfazed in my quest to slurp down the raw goodness of the sea.  We walked into the small old building and sat at the L shaped counter.  A gentleman asked if we had ever been there and when we replied no he gave us an expansive menu!  He then asked if we liked oysters to which I gleefully replied yes! I immediately ordered a half dozen raw as I look over the menu.  I had done a bit of research so was already a little prepared for what I wanted to try: all of it! The gentleman proceeded to pull out a bucket of oysters and shuck them right in front of us!  I was popping the raw oysters while checking the menu, and we also agreed to get half a dozen baked, loaded all the way with cheese, bacon, and jalepeno (mostly for Erik).  As I’m eating I notice I’ve had way more than 6 oysters and the fellow kept plunking a few extra down as he readied the other half dozen to bake. I guess he could tell I was enjoying them.  We also ordered a thing of crab claws and a fried basket of grouper, shrimp, oysters, fries and hushpuppies.  We got so much more food than we ordered as we got about 10 oysters with each order instead of 6, and there were extras in the fried basket too!  I highly recommend this place if you are ever in the area for the best oysters, raw and fried!  The raw were some of the freshest I’ve ever had and I loved that they were shucked in front of me, and the fried oysters were amazing! They were just barely breaded, light and crispy bites of goodness.  YUM! Gene’s oyster bar in Panama City might be a little out of the way from the beaches, but it is so worth it. 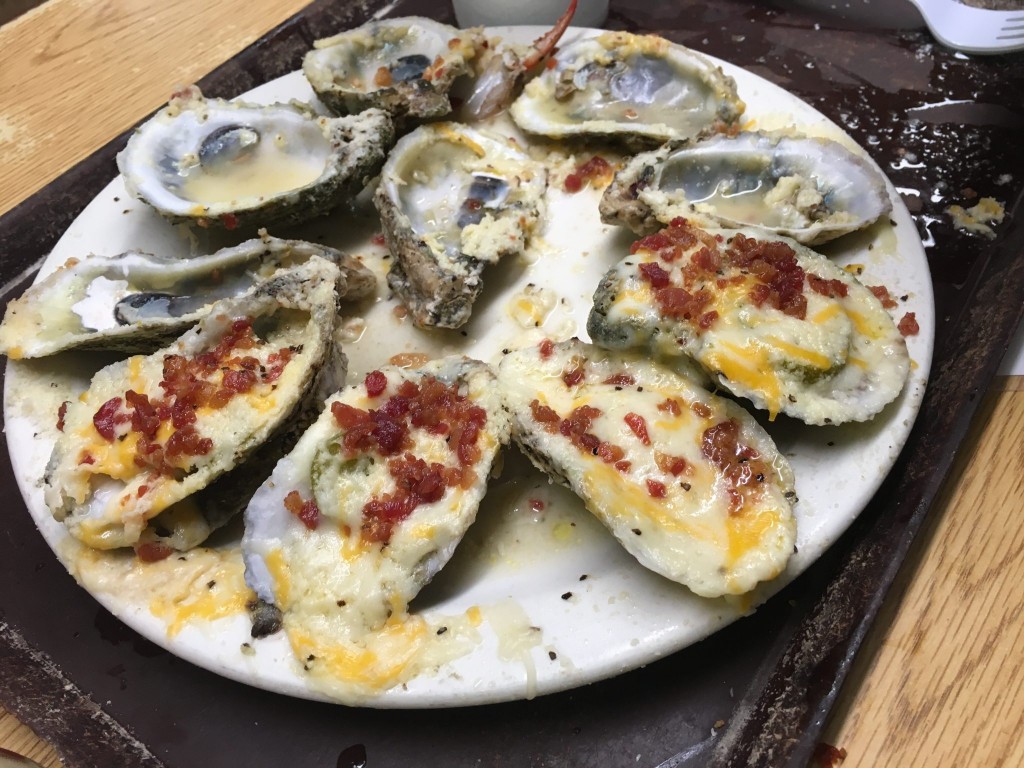 the baked oysters, YUM! genes half a dozen 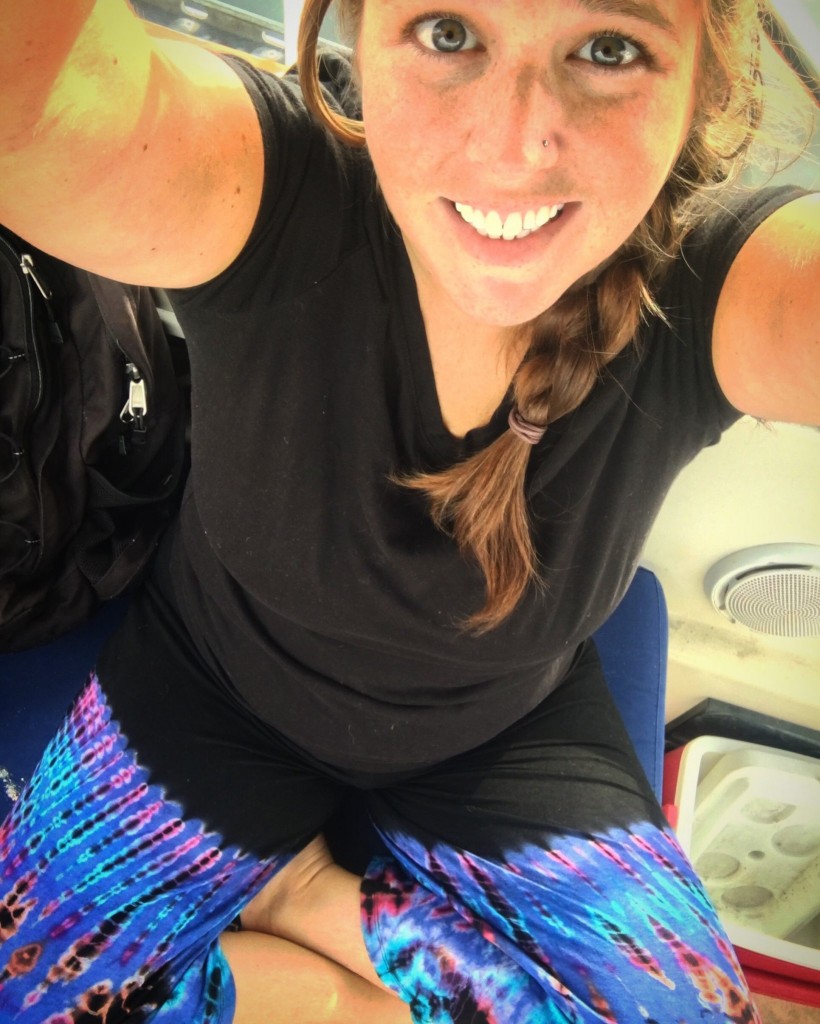 It had been three weeks since Dad left and the last time we went grocery shopping so we checked the maps but the closest grocery was a Dollar General.  We made the trek there hoping for fresh produce but there was none to be had.  We grabbed a couple of things and went back to the boat.  After realizing we had been in Panama City for way too long we started to make plans to leave. 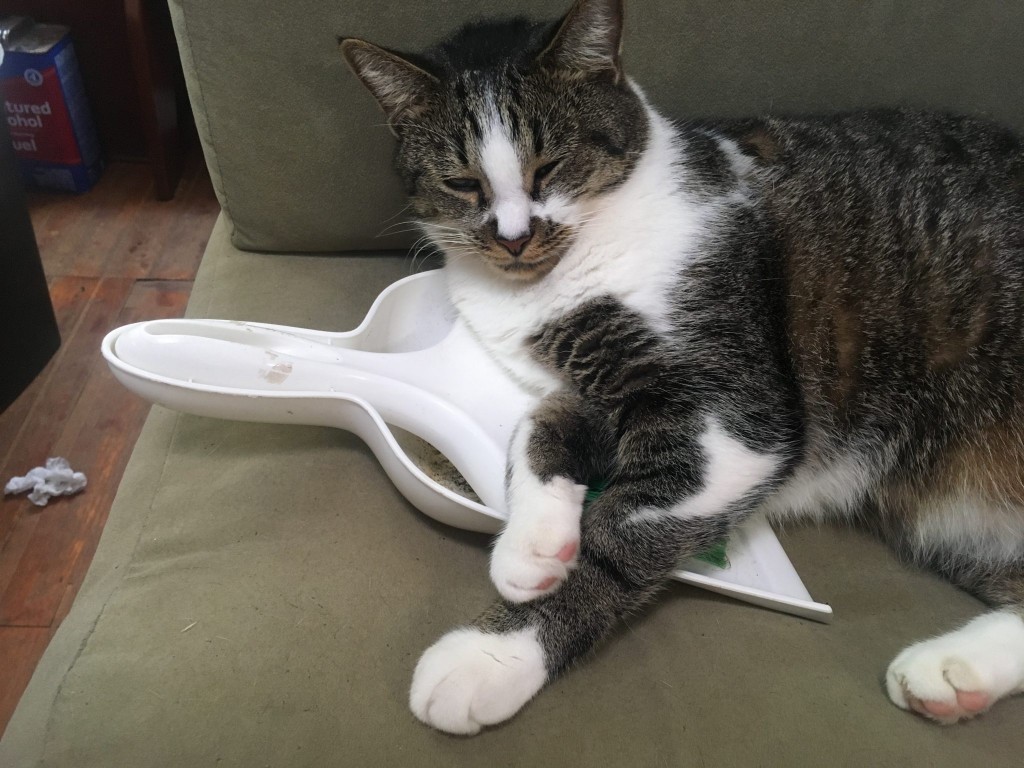 Sammy helping with the sweeping