Made it to Mobile Bay

We made it! The night before heading into the bay we tucked into a side bayou for a cozy night.  As we were pulling out in the morning, a barge was heading up stream at the same exact time we were heading out and it looked like it was coming straight for us because there was a bend in the river upstream.  We were flustered and weren’t paying attention to the depth meter as we skirted the entrance and ran aground unintentionally for the first time on our trip. Whoops! We weren’t going too fast though, so Erik hopped in the dinghy and used our 6hp outboard to tug on our boat while I put it in reverse and did my best to steer us out of it.  It ended up working and we were able to head downstream on the last river stretch of our journey. 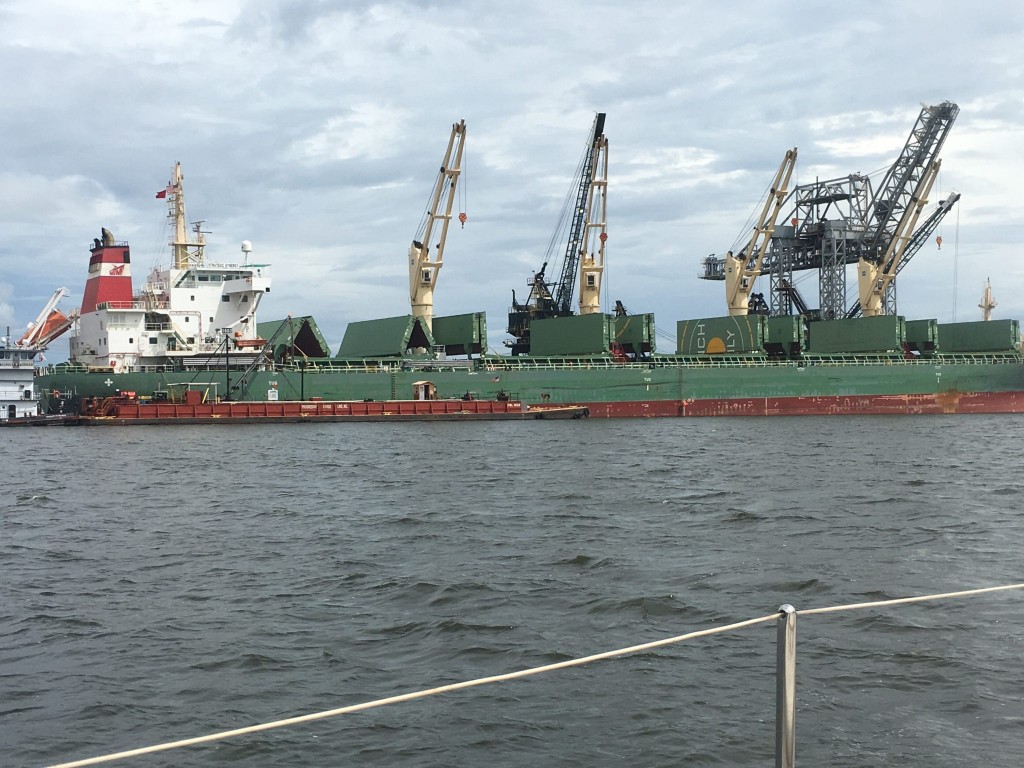 Entering the Bay had me overwhelmed! I felt like a tiny insignificant ant dwarfed by massive cargo ships, destroyers, and tug boats.  Thankfully we only passed tug boats as they were coming and going, no cargo ships were on the move while we were there.  We were reading the names of the giant ships and they were from all around the world.  We admired their life rafts, their giant anchors, the amount of effort a bottom job would take. 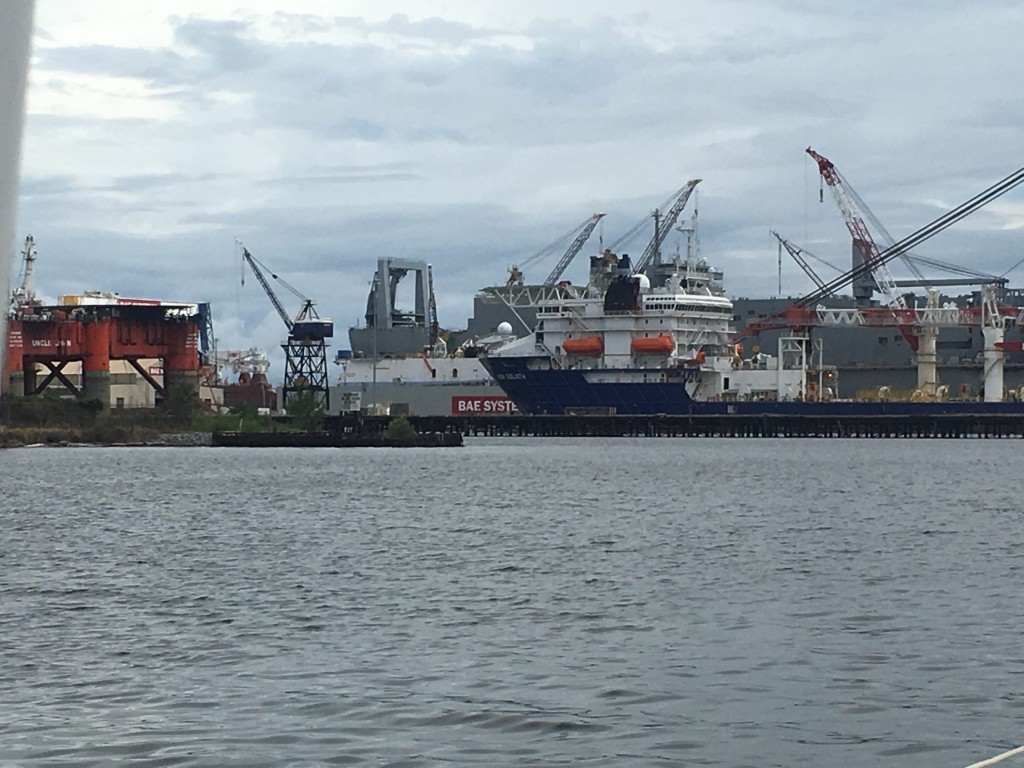 Mobile Bay was bustling with ships and also with shipbuilding.  We passed a couple of boats that were for the government and are designed to go under the radar. 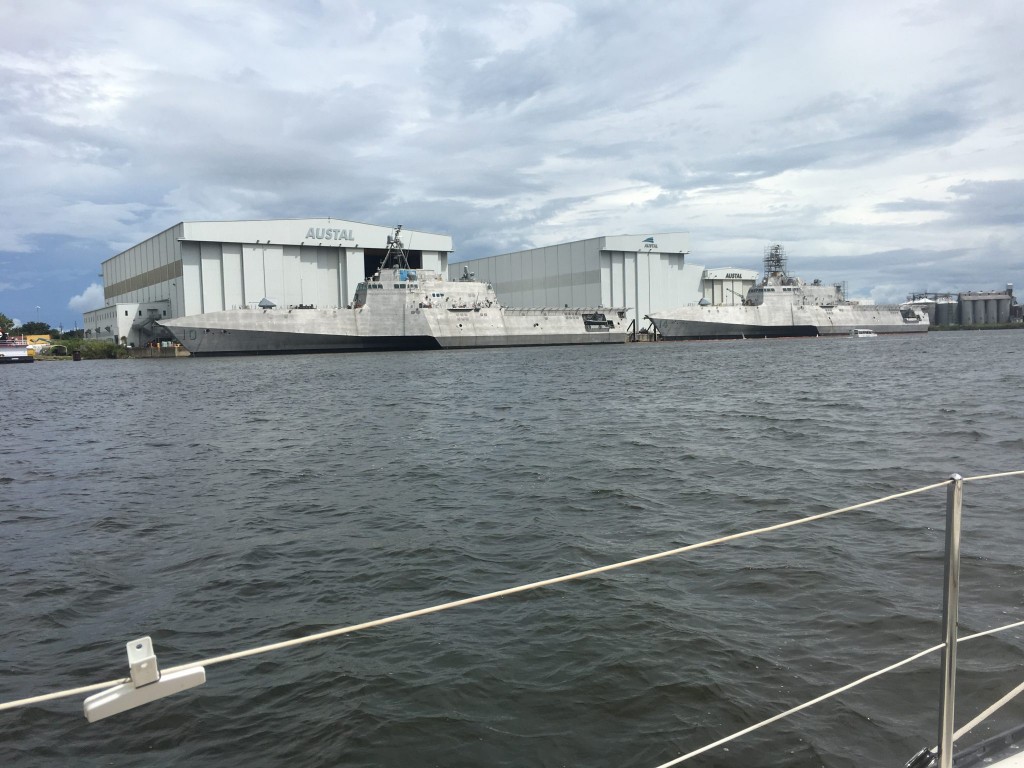 I couldn’t wrap my head around how crowded, crazy, and chaotic the shipping hub was.  I realize Mobile isn’t even that large of a port, I can’t imagine what some of the larger ones are like.  Hopefully we won’t spend much time in congested areas so we will never find out! 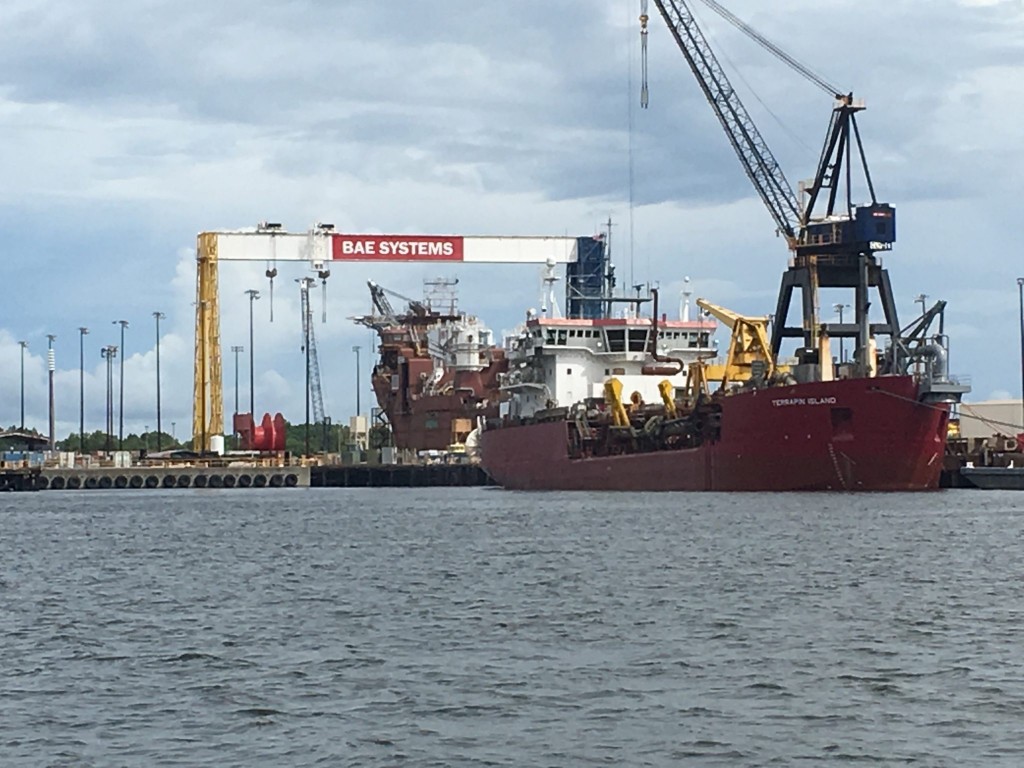 The plan was that after we got through the crazy channel to continue south, and then cut east across the bay, making our way to Fairhope AL to visit with our family friends, The Lacey’s.  The Lacey’s have been in my life for all but the first 2 years I believe.  Growing up in Clarksville, TN we would always run around together while our parents were kicking back.  Eric Lacey grew up and is very familiar with the area, as well as having experience with sailboats, cruising the bahamas, and an expert chef. They are members of the Fairhope Yacht Club so we planned on heading there.  We timed our arrival perfectly with my mothers travels as well.  After her amazing recovery and cancer prognosis (no evidence of disease!) she has been on the move traveling the country, and we were able to see her for 3 days in between a girls beach trip on the coast, and a meeting in south Louisiana.  We toured the quaint town, had some delicious lunches at local restaurants, and ran some errands with her car. 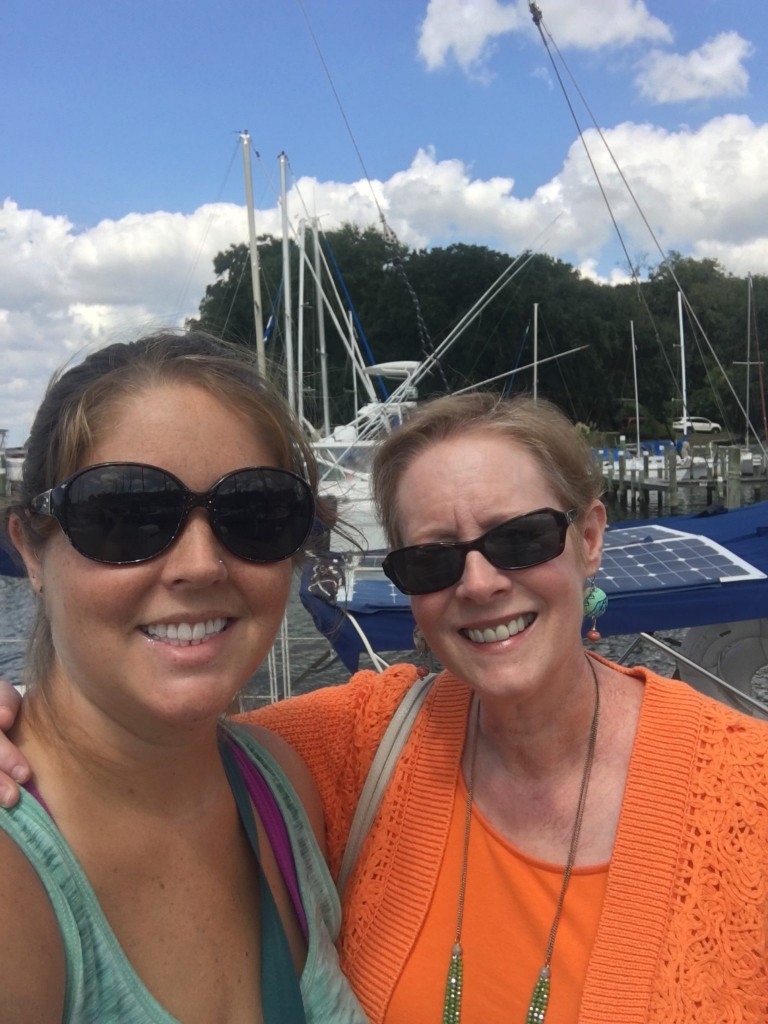 We got to spend some girls time together because Erik was busy taking apart the heat exchanger and cooling system. As I mentioned previously, he noticed the need to top off the coolant tank with antifreeze every once and a while on our journey south.  There were many possibilities as to what could be the source, but now that we were in saltwater we needed to rule out that there was not a crack in the heat exchanger because that could allow salt water to get inside of our engine and corrode it from the inside out.  We rented a radiator pressure tester from auto zone which enabled us to find the leak, it was a small drip from one of the tubes and was easy to spot with the engine off but we think that the drip was so slow and the engine was so hot that it was evaporating, thus the “disappearance” effect. 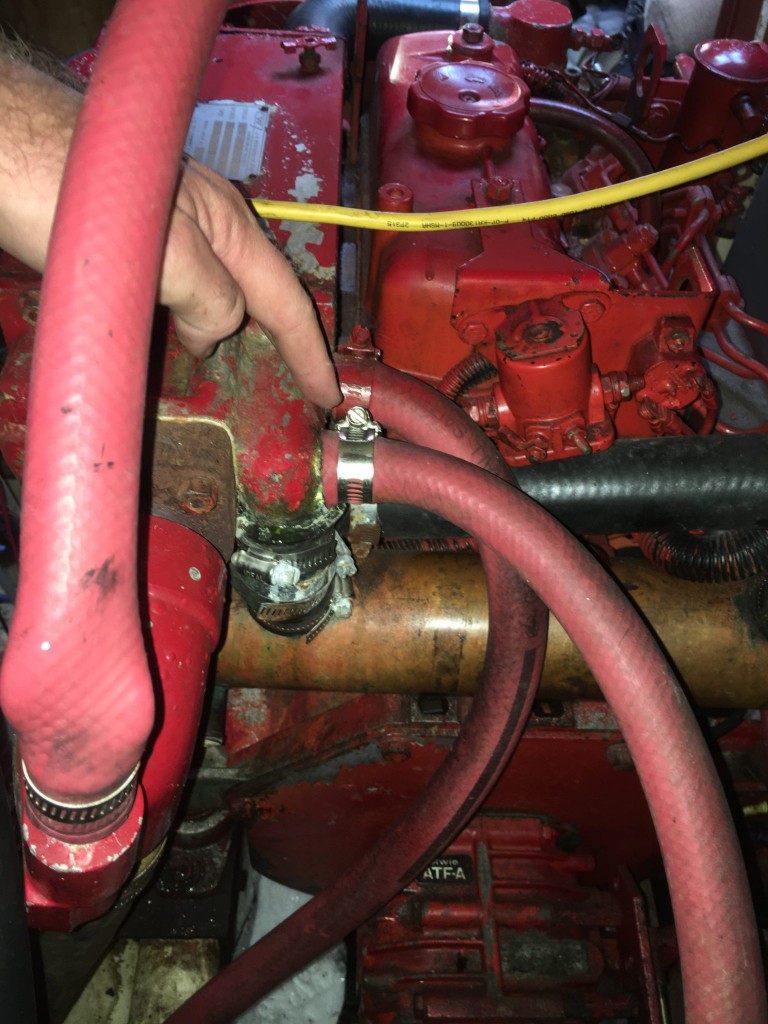 Note a few things in the photo above (before disassembly).  Erik is pointing to the leaking spot and you can see the yellow/white buildup around the fitting as an indication of the leak.  The bronze colored tube below is the heat exchanger, that if we had to replace some hoses we figured we would clean as well.  And the kinked hose in the left of the picture returns the raw water used to cool the engine out the exhaust, and a kinked hose is never a good thing so we addressed that.  Erik disassembled the entire coolant system, the tubing, the heat exchanger, all of it. We got some muriatic acid and long rods to clean out the heat exchanger (found a few small pieces of rubber which looked like bits of an impeller).  Luckily we had all of the required tubing already on the boat! Including an awkwardly bent elbow, thanks PO! And he found a clogged path to the overflow bottle, which he cleaned out.  When he got it all put back together and pressure tested it again, it was good to go with no leaks or loss of pressure! It took about three days to take care of that system of the engine. 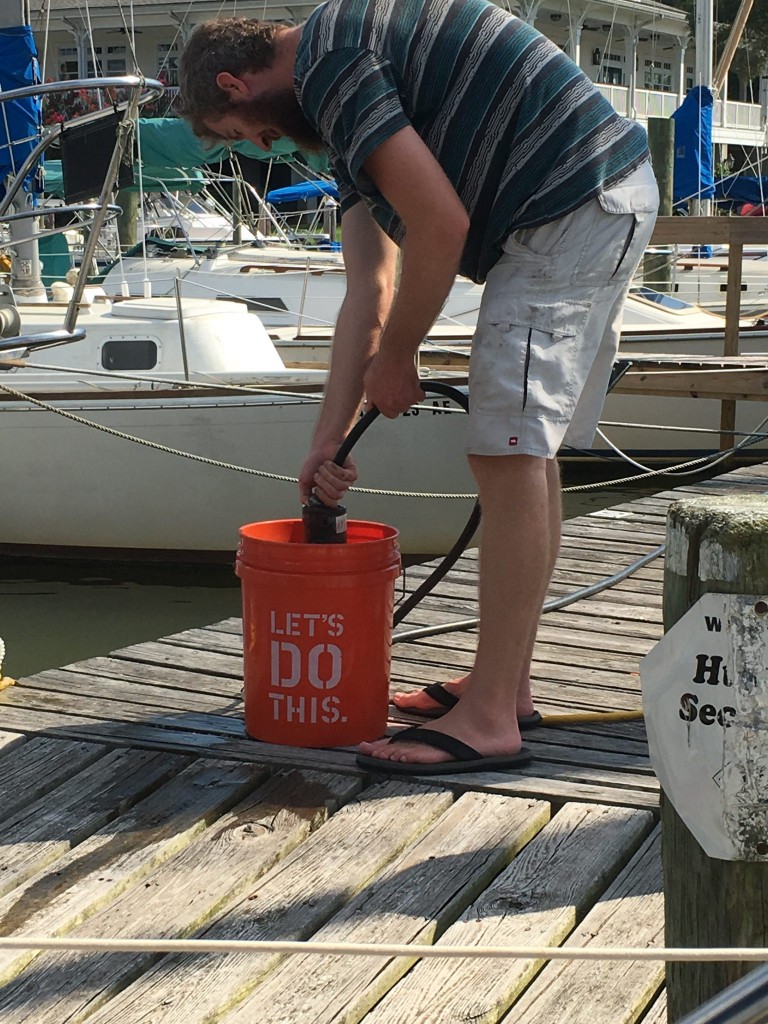 On Moms last day we were all able to get together for a wonderful group dinner! 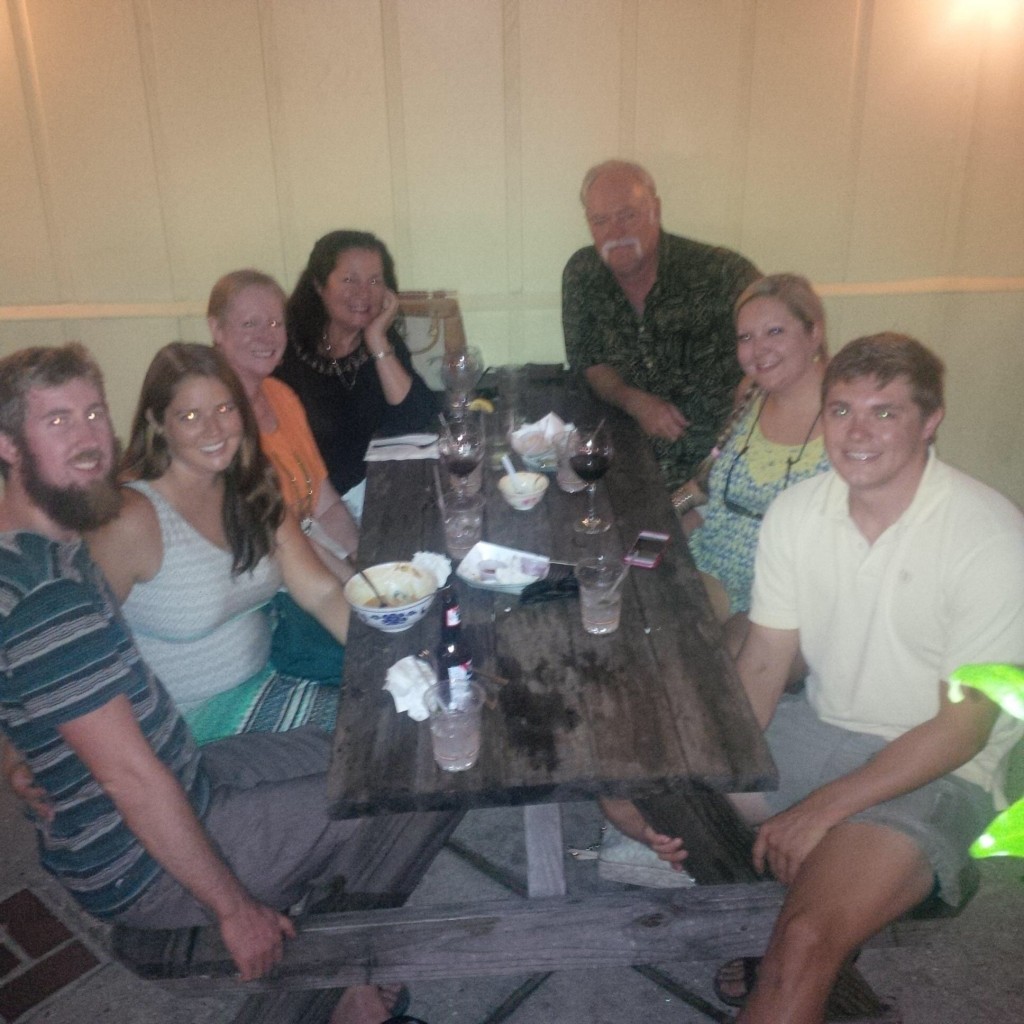 After mom left we stuck around for a few more days and got to spend some great quality time with the Lacey’s.  They cooked us dinner and made us feel like part of the family.  They took us out on their boat and showed us some of a the area and a few awesome anchorages.  One was a great spot near Dauphin Island, and Erik and I immediately knew we wanted to head there next!

An old photo from the Laceys, maybe 20 years ago? Dad with me (far left), max, gus, and sarah. I’ve been chasing waterfalls for a while!

We spent a total of 7 days at the Fairhope Yacht Club, but the rate there was only $10/day so we paid about the same (a little bit more) than one day at the marina.  It was a great deal, and even if Erik griped about spending some money it was crucial in getting the coolant system cleaned up.  With our new destination in mind we readied ourselves for the journey and planned on taking it nice and slow as we learned along the way. 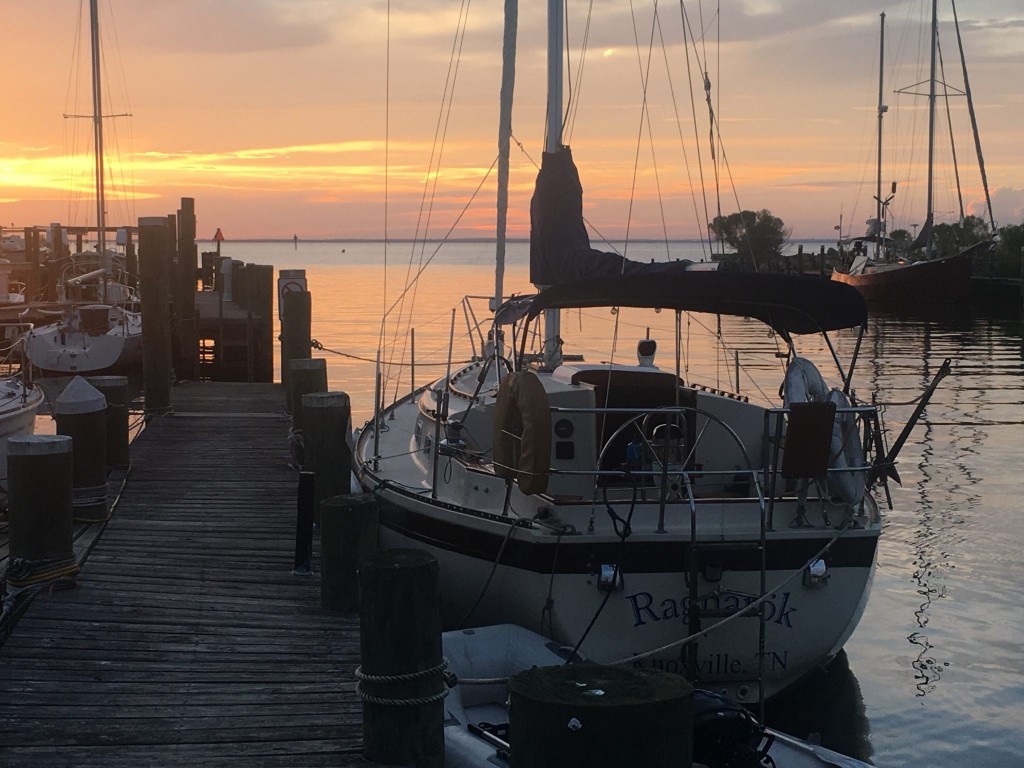 Another reason we don’t really enjoy staying at the docks is Sammy becomes a menace! When he knows there is land he can get to, he gets reckless jumping from the boat.  He also jumps onto other peoples boats which is NOT GOOD! We learned this while we were still in Knoxville, so we keep a close eye on him so he doesn’t jump on boats, but when we are busy (like cleaning out the heat exchanger) he gets locked in the bathroom.  Which he doesn’t seem to mind. 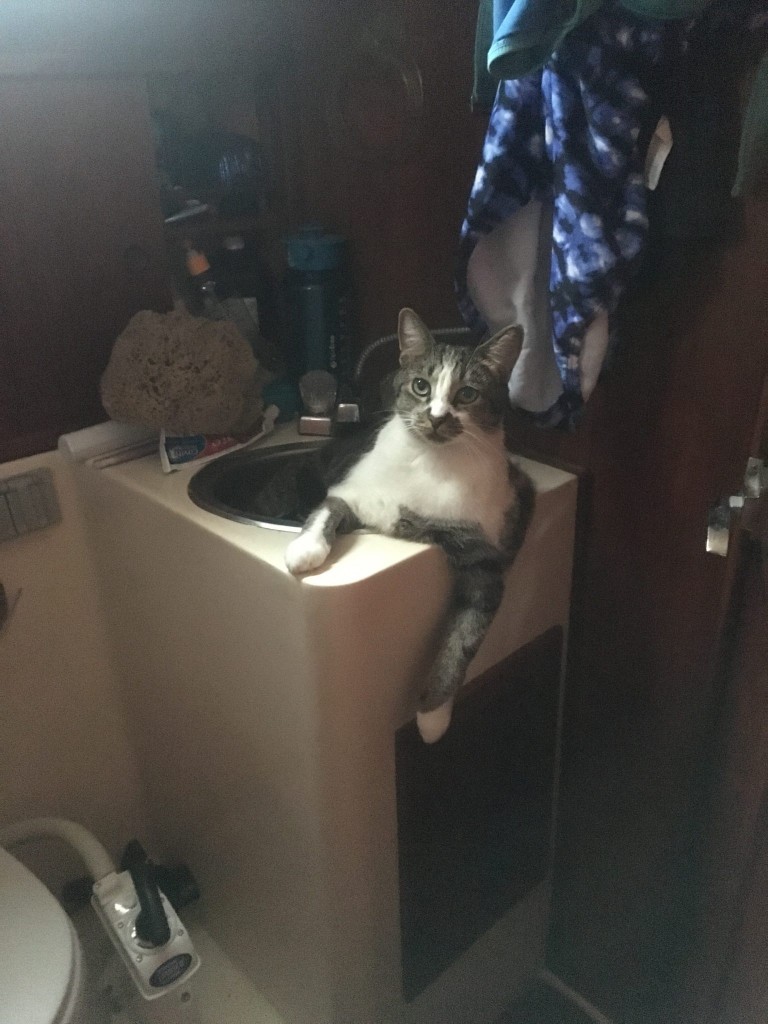 Here is a picture of Sammy on the last day on the Tombigbee.  I had moistened this bandana to keep my neck cool, and put it on him as a joke.  He loved it.  He wore it all day long.  Thats one cool cat! 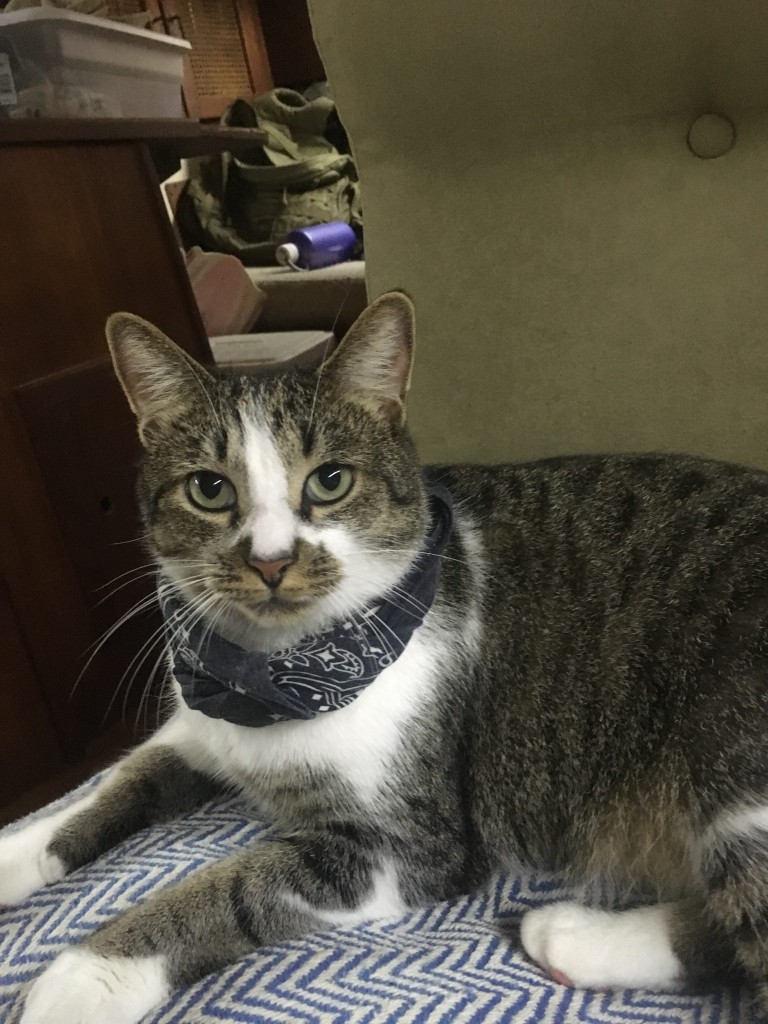